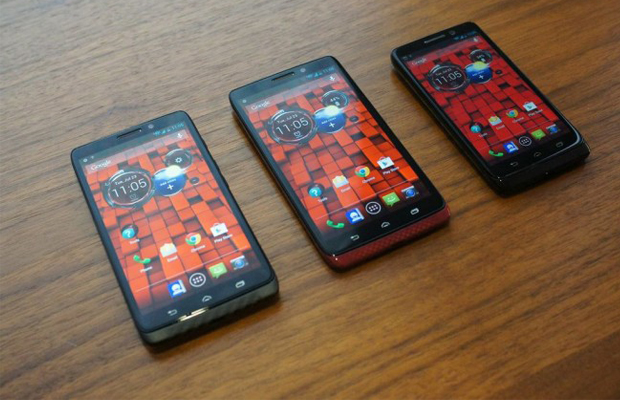 The moment Verizon and Androidphiles have anticipated over the past few days has finally arrived, with the carrier unveiling not one, but three new smartphones in the Droid series: the Droid Mini, Droid Ultra, and Droid Maxx. Earlier reports had Motorola announcing either the Ultra or the Maxx solo with leaked images surfacing on the Internet, but it looks like we were all duped. As for the three new models, here is an abridged breakdown for each.

Coming in at the entry level, the Mini will feature a 4.3-inch screen and dual-core Qualcomm Snapdragon S4 Pro CPU. The Ultra is rocking out with a 5-inch OLED 720p panel, Qualcomm Snapdragon S4 Pro 1.7GHz dual-core, 16GB of memory, 10MP camera, a 2,130 battery, and a 7.2mm thin frame. Lastly, the updated Maxx flaunts the same specs as the Ultra with the exception of the larger 3,500mAh battery, wireless charging capability, and 32GB of memory.

Each Droid will run on Moto’s new X8 Computing system, which enhances CPU performance by 24 percent with graphics performance increasing by 100 percent. The system will also be used in the upcoming Moto X smartphone. Pricing goes as follows under a two-year contract: Mini ($100), Ultra ($200), and Maxx ($300)

Pre-order all three now at the Droid Does website.