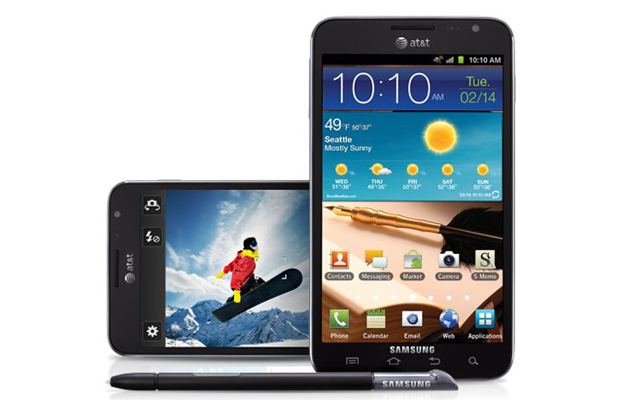 Samsung’s been taking shots at Apple and pushing its “Next Big Thing” ads for the past severals weeks leading into the official US announcement of the Galaxy Note. Once the mobile giant aired its multi-million dollar spot during this year’s Super Bowl, the buzz began accumulating and consumers eyes were soon targeted at the proclaimed tabletphone. Donning the biggest touchscreen of any smartphone on the market (5.3-inch HD Super AMOLED), AT&T’s improved LTE service, and introducing its latest high-tech stylus known as the S-Pen, Samsung’s hybrid device carries all the hardware notes (no pun intended) to be the biggest Android handset on the market. An iPhone 4S killer? That’s a different story. After spending some quality time with the behemoth, the techsperts have launched their Galaxy Note reviews, and we’ve pulled together some of the best ones to give you the full 411 on the next-gen smartphone. The verdict: 50/50.

Ginny Mies (PCMag)
“The Galaxy Note’s 5.3-inch display puts the Note in an interesting spot between a phone and a tablet….As somebody who is reluctant to hop on the tablet train, the Galaxy Note’s size is ideal to me. I like being able to whip the Note out to jot down ideas, and I love being able to doodle during a meeting or while riding the bus. To me, this is a perfectly sized tablet. But a perfectly sized phone? I’m not so sure. I wish Samsung sold a Wi-Fi-only, carrier-free version in addition to the subsidized AT&T version with LTE. I see it more as a secondary device–something I take to work, but not out to dinner or to the beach. Overall, the Galaxy Note works well with the S Pen, and I am excited to see more pen-supported apps. Right now, the selection feels a bit limited.”

Vlad Savov (The Verge)
“Samsung believes the Note is the ultimate expression of versatility and convergence, allowing you to leave all other devices at home. I partially agree with that assessment: yes, it represents the very cutting edge of technological convergence, but no, it won’t replace more specialized tools…The Galaxy Note fails to make a compelling case to replace any, let alone all, of its targeted handheld devices, but that doesn’t make it a bad tabletphone in itself. Not at all. Its dual-core processor is a legitimate powerhouse, the 8-megapixel camera oozes quality from every shot, and the WXGA Super AMOLED display is both gorgeous and dense enough to make you forget about its Pentile roots. It’s only the one-size-fits-none form factor and some software troubles that hold the Galaxy Note back from being a truly memorable mobile device.”

Alex Bracetti (Complex)
“Consider the Note a device that succeeds on many levels as a mobile, while teasing tablet-like performance. Great 4G speeds, powerful benchmarks, and the most beautiful touchscreen out there. The inclusion of the S-Pen also adds a touch of nostalgia with a modern twist, as the mechanics and features found on Samsung’s stylus make it a noteworthy (and useful) accessory. Is that enough to proclaim it an iPhone 4/4S killer? Not quite. There aren’t enough programs that really demonstrate the S-Pen’s true potential, plus its ginormous form factor and ICS-less integration ends the debate. There’s still a lot of ground to cover before labeling the Note a handset that bridges the gap between smartphones and tablets. The Note is a solid introduction to what could be the future of tabletphones, and if Samsung commits to upgrading the Note’s software and increasing the S-Pen apps library, then that’s all she wrote.”

Tim Stevens (Engadget)
“The Note is big, but not unmanageably so. Those with small hands might find it a bit unwieldy at times, but even if your glover has you written down as XS you shouldn’t rule this out completely. After a few hours with the Note you’ll very quickly become accustomed to the size, and once you have you won’t want to go back. With the decrease in performance and battery life here, the international release is still the better phone overall, and we can’t help but be disappointed by that. Still, given the relative affordability of the US release of the Note ($300 on-contract) and its ease of availability, we certainly wouldn’t blame you for heading to AT&T and ordering yourself an American Superphone. It’s one of the best phones of any size on the market today, regardless of what market you’re in.”

K.T. (GottaBeMobile)
“…The Galaxy Note is a versatile phone, a decent tablet, an excellent mobile multimedia machine, and a good camera rolled into one device. While the size isn’t a big impediment, for some consumers the GNote is going to be too much. For others the benefits are worth the lack of back pocketability. This is a phone that you should definitely see for yourself before you buy it. There’s no absolute way to tell if your hands are big enough or it fits comfortably until you hold it.”

Walt Mossberg (AllThingsD)
“After testing the Galaxy Note, I have decidedly mixed feelings about it. It isn’t a very practical phone and, as a tablet, it can’t match the experience of the iPad, which is more spacious and has over 150,000 apps designed for it. However, I can see where some folks might consider the 5-inch screen a good trade-off for much better portability than other tablets, and Samsung has done some very interesting work in making the stylus, which is stored in a slot on the device, useful….The stylus is a big plus, at least for users who like to jot down notes, create sketches or annotate documents in a way that’s much more precise than using a fingertip. Even on the iPad, which wasn’t designed for a stylus, third-party styli have become quietly popular, but Samsung has taken the idea much further…The Samsung Galaxy Note isn’t for everyone, and I can’t recommend it as the main mobile phone for most people. But as a stylus-driven small tablet, it might be just what some users are looking for.”

Vincent Nguyen (SlashGear)
“The Galaxy Note is either a very large “super” phone or a pocketable tablet that happens to make phone calls. That’s great, but if you buy the Note you need to know that there will be roughly 20-percent of the time when you won’t be able to use it. The scale of the device demands a two-handed grip or, if you attempt to go one-handed while walking, driving or otherwise distracted, it will slip through your fingers, I guarantee it. The AT&T Galaxy Note LTE does what it does very well, but those who can handle it are likely few and far between.”