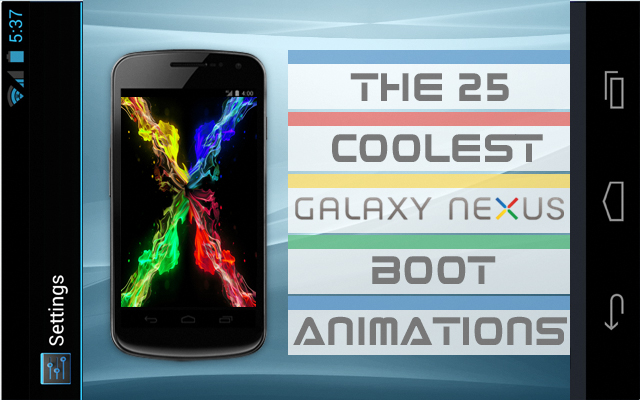 The Samsung Galaxy Nexus is one of, if not the only Android phone on the market capable of mating style and substance. From its slim, sexy profile to its Ice Cream Sandwich sweets like face unlocking technology and Google Wallet—suffice to say the Verizon powerhouse is the hottest handset for now. But even with its immaculate feature set, some owners have become bored with the device’s lackluster boot animations. Well, we rummaged through the Net and discovered a vast selection of start-up visuals sure to enliven your touchscreen. Best of all, a majority are downloadable. So spoil yourself silly and browse through the 25 Coolest Galaxy Nexus Boot Animations.

Note: Don’t be fooled by the blacked-out thumbnails. Click of any one to watch the magic unfurl. Also, look below to read how you can install these babies on your rooted or non-rooted Galaxy Nexus handset.

Instructions (Rooted)
– Download .zip and drag it into the device’s storage folder
– Reboot into ClockworkMod Recovery
– Find the folder holding the .zip file
– Install .zip and then reboot and that’s it

Instructions (Non-rooted)
– Use an ADB (Android Debug Bridge): a versatile command line tool that lets you communicate with an emulator instance or connected Android-powered device.
– Follow the same steps for a rooted device mentioned above.

Much love to RootWiki for sharing these with the Android faithful.