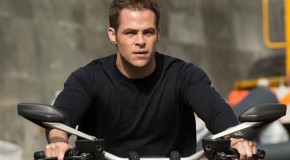 Looks like its lights out for the shadow recruit

The search for the next Jack Ryan is officially over. Say hello to Star Trek’s Chris Pine. Producer Mace Neufeld updated everyone at a press conference for the Clint Eastwood film, Invictus, about the