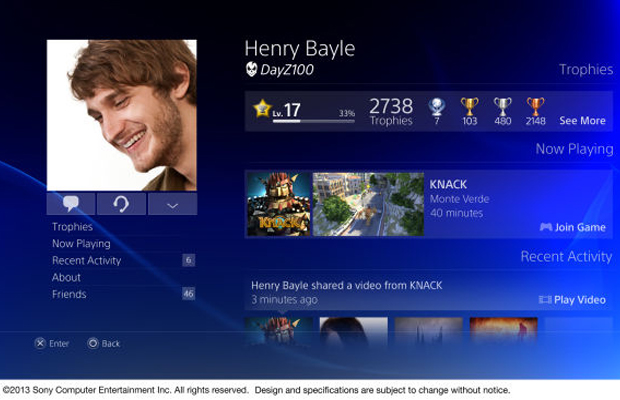 So Sony’s pretty much launched the PS4 already and millions of gamers across the nation called out of work to get familiar with the next-gen console. The gaming giant invited tons of media to its pre-launch festivities on Monday and showcased an in-depth overview of the PS4’s features: including the new PlayStation interface, PSN Store, and more.

The UI garners a more social approach and introduces gamers to the login screen, where after the booting up process displays all available player accounts that also boasts facial recognition via PlayStation Camera. It supports guest accounts for friends and other temporary users as well. The console requires players to raise the DualShock 4 into view as a security measure to eliminate false logins.

You’ll notice core categories presented on the horizontal linear view that includes the new “What’s New” tab, which doubles as a news feed for all the latest status updates, in-game activities, captured video clips, and much more. The OS is extremely faster than on the previous consoles, executing all actions promptly from opening party chats to loading the browser. Games on the other hand take some time due to the larger file sizes. Both party and messaging systems have been revamped and expanded to support cross-platform, real-time text, and audio communication. One of the other dope features here is users can use the DualShock 4’s to move the cursor around the screen and messaging thanks to the controller’s built-in motion sensors.

The PS4 now allows up to 2,000 friends on the friends list and lets players share and identify themselves by real names. Players can now dictate streaming and control the format of their broadcast, plus the OS integrates the Twitch browser—showcasing live steams for full-screen viewing. On top of that, the system records the last 15 minutes of gameplay at all times that can be edited to small clips and shared on social media sites like Facebook and Twitter, though clips can only be shared from within the PS4 OS.

The PSN Store is redesigned and bears a more image-centric look, plus you can prioritize the download of particular modes and content to speed up the gaming process. Most media files like movies and music are all carried over to the cloud, saving players on-board storage and offering immediate online access whether purchased or rented.

It’s a lot to take on the first day, as we all know you’re gonna jump on Killzone: Shadow Fall before really exploring the console’s internals. We don’t blame you. Hope this helped.