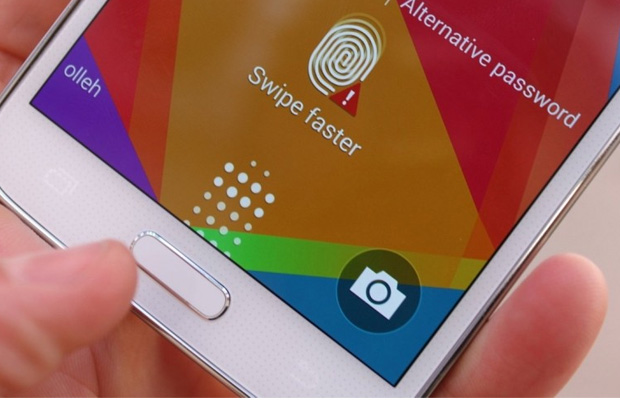 SamMobile cites “highly credible sources” in reporting that the next-generation flagship, Galaxy S6, will have a touch-based fingerprint scanner. Samsung has included fingerprint scanners on several devices, but they were based on swipe-based technology, which often leads to identification errors.
The report is indicating the new fingerprint scanner will function much like the Touch ID does on the iPhone6 and iPhone 6 Plus, allowing for an entire finger to register, not just the partial. The current system does allow for multiple angles of a fingerprint, although few users seem to know of this option.

The website also says that like the predecessor, the new touch-based sensor is built into the home button. However, the home button will be larger when compared to the Galaxy S5 and Note 4, which should make for a flawless experience. Place your finger on the home key, at any angle, life and you’re done.
It is reported that Samsung is not working on any new software features for the scanner, but legacy features such as web sign-in, secure payments via PayPal, and account verification are all expected to be present.

After several lackluster flagships, Samsung appears to be taking the “Project Zero” redesign of the Galaxy S6 seriously. Will this be the phone that reminds the world why Samsung became the worlds biggest smartphone manufacturer?