You know your stuck in Dante’s Inferno when NFL teams and players are being spoofed with names such as the Midway Monsters and Icebay Bashers, Bones Jackson and Scary Ice. Chilling isn’t it? Every field has a unique set of fatal booby traps that consist of landmines, firepits, toxic waste puddles and many other fumble initiators. Each team comes prepped with deadly specials (known as Nasty Audibles) that range from exploding balls to bone crushing hits that put the opposing quaterback 6-feet deep in the creek. 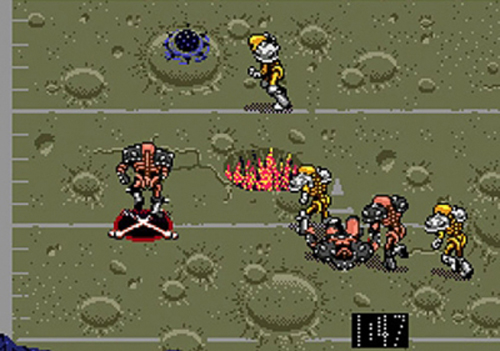 What other football game at the time allowed you to bribe refs to call phony penalities on the opposing team? Full season mode opened the floodgates for pain-inflicting hits, as gamers embarked on their glorious run to the “Hole of Fame”. You gotta love a game with some humor and simplistically fun gameplay. Many forget Mutant League Hockey spawned a saturday morning cartoon series too. We have no problems reminding ya’ll on this memory trip lane.