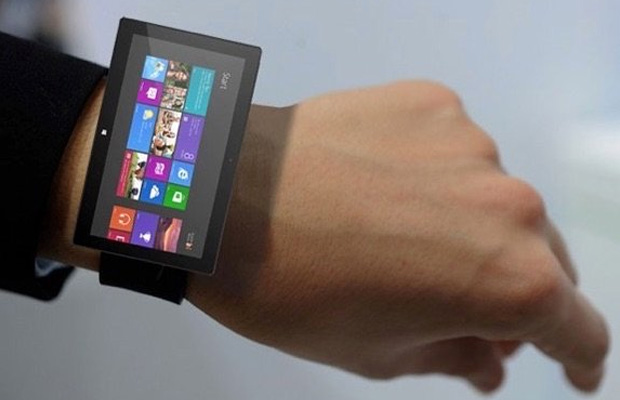 Techies knew it was only a matter of time before Microsoft entered the wearable market and produced its own wrist-worn device. The company filed for a patent a while back, which confirms such plans, but doesn’t necessarily equate to what the PC giant will actually make. All that’s known is the so-called Surface Smartwatch will be iOS- and Android-friendly, at least according to a report from Forbes.

However, one publication is already claiming it got a hands-on with the prototype and went on to detail their experience with it. Gear Live states the form factor is “comically large” and features a “flat display.” Below is a minor breakdown of their preview with the device:

– As far as looks, the image above is a parody, but not far off. It has an elongated form factor, but isn’t as comically large as what’s in the image. It is much more akin to something like the Fitbit One or Samsung Galaxy Gear Fit in shape rather than taking on the shape of a traditional watch, like Pebble did, or like what Google shoed off with Android Wear. What we saw had a flat display, while the inner portion that would rest against your skin was curved.
– The icons are he flat style that Microsoft has been using on its other devices like Windows 8, Windows Phone, and Xbox One. That’s what tipped me off in the first place.
– Bluetooth 4.0 Low Energy is how it interacts with the rest of the world.
– The flat glass display in the final product—a high-resolution curved display already exists on the Samsung Gear Fit, and the Microsoft device just didn’t look as good.
– The watch is packed with sensors. It has a heart rate monitor, accelerometer, gyroscope, GPS, and most interestingly, a galvanic skin response sensor all built-in. The galvanic skin response sensor is built into the watch band, while everything else is built into the unit itself.

The fact that it is supports three platforms—gaming, mobile, and gaming—is pretty wicked, along with its wide array of sensors. If true, that is. Adding Kinect functionality to the smartwatch would only raise more interest from the consumer public. But until Microsoft shows us something, you can take the feedback however you like.