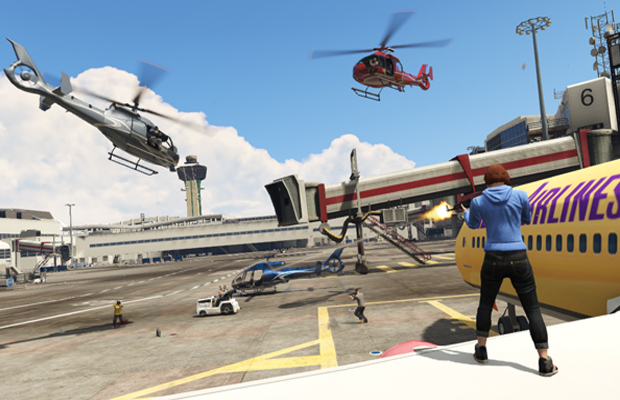 Haven’t grown tired of GTA Online yet? Rockstar Games is giving you more reason to stay glued to its action shooter with a new software update that offers up a new Capture Mode and other dope upgrades. According to a recent Rockstar blog update, “Strategy plays a huge role as you run decoys, set traps and place obstacles to ensure your enemies don’t get close to your goods.”

Four extensions of the mode will be made available to gamers: Raid, Hold, GTA, and Contend. Raid forces players to break into an opponent’s base, steal a package and deliver it back to your base to score points, while Hold has teams collecting and storing as many packages as possible in their base. GTA makes you steal targeted vehicles at specific map locations and Content pits you against others to retrieve only one package safely to your home base.

Some of the other features being upgraded in GTA Online are include the following via path notes:

– Increased cash payouts for losing teams in Last Team standing and Team Deathmatch
– Increased the cash and RP rewards for Races with multiple laps
– Cash payouts for Parachuting now take points scored into account
– Improved spawning for Deathmatches where the spawn points were previously very far apart
– Improved support for Chinese, Japanese, Korean, and Russian in the Creator
– Calling the mechanic now shows you if a vehicle on the list is destroyed or impounded
– Team balancing does a better job of putting friends and crew members together
– BETA Crew Head to Head matches are now available to play. To initiate a Crew Head to Head, you’ll need to create a Playlist that does not contain Vehicle Deathmatches, Survivals or any Jobs that require more than 2 teams. From there, go into My Playlists and you’ll see a prompt for Head to Head (BETA). This will launch the lobby and you’ll be able to invite other players from your Crew, Friend’s Crews or Skill Matched Crews
– Player blips no longer remain red on Missions when the player has a Bounty
– Players who end a Race as DNF are now awarded cash relevant to the amount of checkpoints they passed through during the course of the Race
– Players who race solo now earn cash. Previously, zero cash was awarded for a solo race
– Last Team Standing, Capture and Missions are separated out in the Create Playlist menu
– Small deduction to the amount of cash the winners of Races, Parachuting and Last Team Standing matches receive in order to increase payouts for all other participants
– Masks are now removed during Races where a helmet is required and are also removed by default when a player uses the Smoking animation
– The Purchase All Ammo option now charges the full value of filling all player held weapons with ammo
– Fixes an issue where GTA Online players could reach North Yankton
– Fixes a rare issue where characters could be lost if the player attempted to join GTA Online when disconnected from the Network
– Fixes for various duplicate vehicle exploits
– Fixes issues when using the Character Select from inside the Creator
– Fixes issues with ammo vanishing after testing a Deathmatch in the Creator
– Fixes exploits of the Fastest Lap bonus
– Glasses from the Beach Bum update now appear in the inventory menu
– Players in Tanks now have more protection from other players attempting to deliberately give them a Bad Sport rating
– Bad Sport timers now read properly and show the correct time left in the Bad Sport lobby instead of “00d00h00m”

That’s your cue to download the latest patch update on PSN and Xbox Live. Right now!