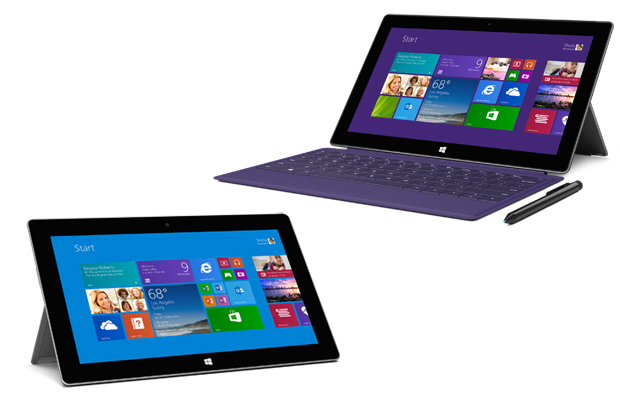 As the big holiday announcements continue to pour in from the tech game’s biggest players, Microsoft’s decided to join in the soiree with the official unveiling of its next-gen Surface tablets dubbed the Surface 2 and Surface Pro 2.

Powered by the latest Haswell processors, Microsoft VP Panos Panay says the company “improved the performance on this product by 20 percent,” while saying it’s increased graphics performance by 50 percent and indicating each device is now faster than 95 percent of laptops on the market. Pretty bold statement there. The update in hardware means we should see a vast improvement in the Surface 2’s battery life in comparison to its predecessors: about 60 percent.

One of the other notable hardware/design features that’s been implemented in the updated models is the new built-in kickstand, which supports a second position that props it at 55 degrees to accommodate better viewing angles. Microsoft’s also offering some sweet services with the package such as one year of free Skype calling to landlines and unlimited use of Skype-branded Wi-Fi spots, plus 200GB of SkyDrive storage for two years. Pretty huge deal there.

Peripheral-wise, the company’s updated its accessories line including the physical and touch keyboards. The new attachable typers dubbed the Power and Type Cover 2 now support backlit lighting and a built-in battery for extended vitality on the go. In addition, there’s also a new docking station that transforms the tablet into a traditional PC.

The Surface 2 and Pro 2 are available for pre-order now on Microsoft’s website and are set for launch on October 22 at the respective price tags of $450 and $900. Reserve yours now!