Lex Luthor Teaming With The Joker in ‘Suicide Squad’? 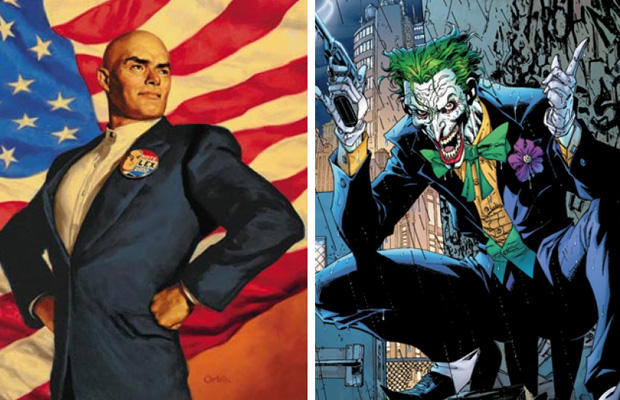 Warner Bros. has huge plans for its DC Universe takeover and it all looks to revolve around the upcoming Batman V. Superman: Dawn of Justice. Ironically, the one film that looks to be generating more buzz than the superhero crossover is Suicide Squad, which will introduce us to a world of anti-heroes and villains from the DC realm.

Casting has pretty much been confirmed with Will Smith, Margot Robbie, Jared Leto, Jai Courtney, and Viola Davis all set to take on roles in the film. However, no one is sure of what other baddies will join the Joker in his reign of chaos. According to Latino Review via two sources, we should expect Superman’s biggest nemesis, Lex Luthor, to make an appearance as well. These anonymous sources also go on to share some story details. Read at your own discretion:

Source one tells us:

Deadshot and Harley Quinn meet early when Deadshot is assassinating an inmate that is being transported from Arkham. Quinn disrupts the hit when she tries to break Joker out and both are captured and taken to Amanda Waller’s prison.

Waller has Joker moved to the prison as a means to keep Quinn in check. He spends most of the film in a cell, very much like Hannibal Lecter, until he breaks out in the end.

Boomerang is already in the Squad and there is a contention between he and Deadshot, Deadshot killed his father.

The team is tasked on a mission to prevent ‘bio weaponry’ from being sold to Lex Luthor by a human trafficking gang. The gang is handing over the Enchantress to Luthor who it is implied wants her for magical abilities. They kidnap her and take her back to the prison where she is kept in an underground area, which has all sorts of genetic freaks imprisoned including a King Shark.

Rick Flag is there as a watchdog over Waller. The twist is his character is revealed as being in league with the villain, Rick Flag Snr at the end. (This is what I believe may have been the reason Hardy left) It is out of left field. They want the weapons that Waller has amassed.

There is a lot of action in the script but it primarily deals with Deadshot, Harley Quinn and the Joker. Flag is more of a government agent than anything else before his reveal as a villain.

Source two tells us the following.

A draft of the script has been finished and is being circulated between several executives pending a rewrite. The first part of the film concerns the capture of Lawton and Harley Quinn and afterwards they are taken to a maximum-security prison run by a warden called Waller. They are implanted with explosive devices and forced to be part of a mission where they are attacking an arms dealer’s convoy. They are supposed to steal a weapon but end up capturing a woman called June, she has a split personality and her evil side is a sorceress.

Waller is tracking down and capturing every super powered hero and villain and it is implied that she is after Batman but he is not in the film, only mentioned and shown on camera footage. The film is being used as a set up for the franchises villains and not only the Suicide Squad. Belle Reve (the prison) is home to many of villains beyond the leads. The script ends with a prison riot where most of them escape, including the Joker. The Joker has a large part in the movie but doesn’t get involved in any action scene until the very end during the riot where he kills several people.

The script has been getting much praise in the studio. The rumor is Tom Hardy left because of the changes to his characters although he is in two of the main action scenes.

Lots of interesting points here. Latino Review’s track record for reporting spoilers speaks for itself. They tend to always be on-point with their stuff. This could very well end up being DC’s Guardians of the Galaxy.