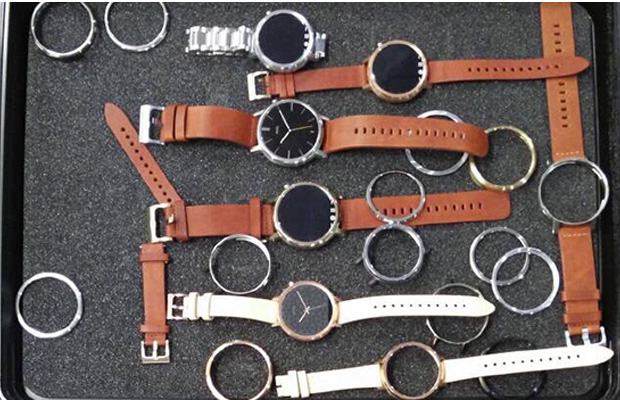 A picture is worth a thousand words, or so the saying goes. Chinese microblogging site Weibo may have posted an eternal fountain of words in a single image. The picture was leaked, supposedly, by Lenovo CEO Yang Yuanqing, showing what just may be an unreleased prototype of the Moto 360 smartwatch.

The image was quickly deleted, but this didn’t stop at least one site from catching and reposting the image of the CEO. A lot can be gleamed from the image. What we know for sure is that it would appear that Motorola is experimenting with new colors, and has at least two different sizes.

The current Moto 360 left out the traditional-looking watch band lug ends, this photo shows them changing their mind. This may not be a bad thing, as the current model has been somewhat plagued with cracking glass in their absence.

It is very unclear if this is the next gen version of the watch or not, but undoubtedly it is a prototype. It does appear evident there is an effort to diversify personalization options. This is done without sacrificing some very familiar features, for good or bad. The much complained about “chin” is still there, which Motorola says was needed to allow smaller bezels.

Wearable tech is here to stay, and Moto 360 has been among the best of the early options. Whether this is a new prototype or an exclusive perk of being CEO, it is an exciting time to start wearing some tech!