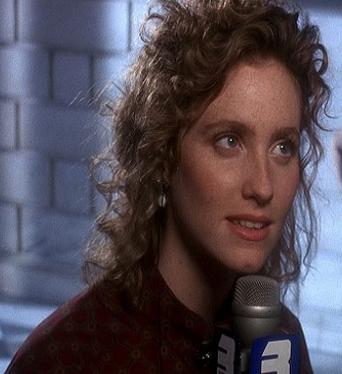 Though it is unclear why, production rolls on for Teenage Mutant Ninja Turtles 2. The first installment of the rebooted franchise earned enough money at the box office to warrant the production of a sequel and the film promises to bring throw new characters, actors and creative talent aboard including Stephen Amell as Casey Jones, Tyler Perry as Baxter Stockman and Brian Tee as The Shredder. Surprisingly, the new filmmakers including director Dave Green, and writers Josh Applebaum and Andre Nemec are not afraid to do their homework and recover a familiar face to appease the appetite of fans of the Turtles franchise and the original films from the 90s. Reports are coming in that Judith Hoag has been spotted on set of the film. Hoag played April O’Neill in the 1990s Teenage Mutant Turtles franchise.

These new snaps from the set of the Teenage Mutant Ninja Turtles sequel give us another look at Megan Fox as April, Will Arnett as Vern, and Judith Hoag as… well, we’re not quite sure. Hoag played April O’Neil in the original 1990 TMNT movie, but this is the first time we’ve been made aware that she’d be popping up in this.

This is certainly a new and surprising turn of events. Granted, it shouldn’t really be hard to surpass last year’s Teenage Mutant Ninja Turtles movie. Seriously, it should not be that hard!