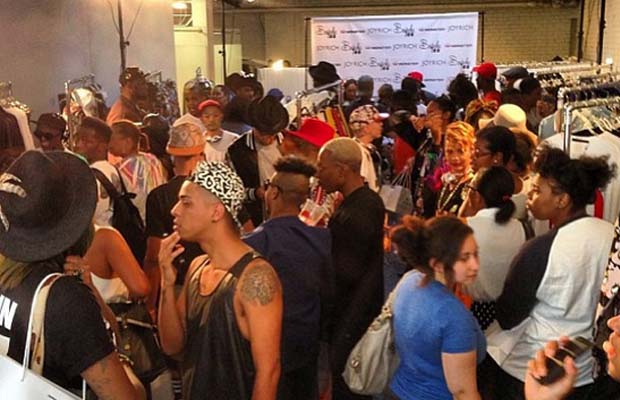 The popular LA-based street wear imprint set off 2013 NYC Fall Fashion Week by opening up its first pop shop in the Big Apple, offering a special glimpse at its Fall ’13/Spring ’14 catalog. Sponsored by Monster Products, JoyRich welcomed several fashion and lifestyle editors, along with some surprise guests to view its urban-inspired collections, which finds inspiration from mainstream staples like the NFL and childhood classics from The Mickey Mouse Club to The Simpsons. On that guest list: Romeo Miller, Kat DeLuna, Adrienne Bailon, DJ Mademoiselle Yulia, DJ Mary Mac 5 Star, Nina Sky, and Cheri Dennis to name a few.

Creative Director David Melgar spoke on the decision to bring a brand store to New York City and what took so long: “We decided to open the store in New York because we knew we had a big following out there, but the timing never seemed right until now. The reactions we’ve gotten from the Joyrich fans have been amazing!” Timing obviously didn’t effect interest in the company, as a mass crowd of fashion-forward purists waited outside in anticipation of its official opening. Some pretty dope stuff here.

Much love to Bespoke for sending the invite our way and promoting the event, alongside Monster. Keep an eye out for JoyRich’s upcoming lineup. Check out some Instagram shots from the event and the company’s stylings below.