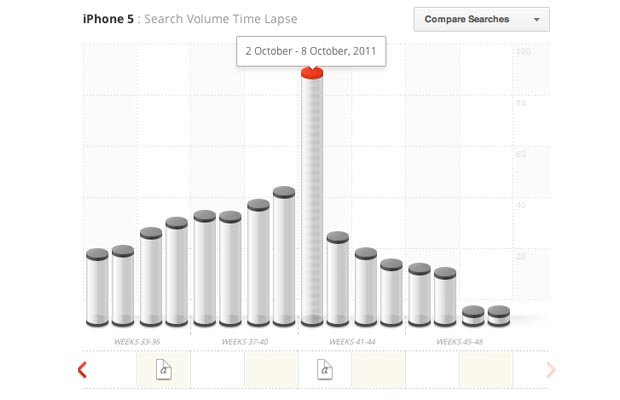 To no surprise, unannounced Apple products peaked in the top 10 of Google’s fastest-growing search terms of 2011. The rumored iPhone 5, which was intended to be announced back in October, ranked sixth, while the iPad 3 came in tenth. But future iDevice inquests weren’t the only popular Apple terms. Searches for Steve Jobs placed the former tech visionary in the ninth spot, thanks to its query increase of nearly 982 percent. Wow. Then again, who wasn’t searching the death of the former Apple CEO when he unexpectedly past?

The statistics were put together under a project titled Zeitgeist, which “sorts billions of Google searches to capture the year’s ten fastest-rising global queries and the rest of the spirit of 2011,″ as stated on the search engine giant’s official blog post. Other notable fast-growing searches that rounded out the top 10 list include YouTube celebrity Rebecca Black, the Casey Anthony trailer, breakout singer Adele, and reality star Ryan Dunn.