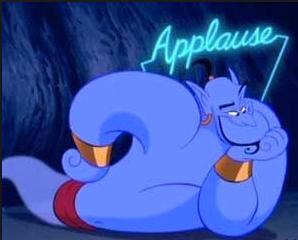 Disney is undoubtedly raking in the money from its various cinematic ventures. Outside of their acclaimed animated features, Disney owns Marvel, which has been making steady income thanks to The Avengers Initiative, they own LucasFilm and are about to unleash The Force Awakens upon the world and they have other franchises that can earn them a decent living like Pirates of the Caribbean and The Chronicles of Narnia. Lately, they’ve been giving live-action treatments to their animated classics such as Cinderella, Maleficent, Snow White and the Huntsman and an Aladdin prequel focusing on Genie is added to the list of future projects.

The studio is developing Genies, a live-action comedy adventure that is being written by Damian Shannon and Mark Swift. Tripp Vinson is on board to produce via his Vinson Films banner. The new project would focus on the realm of the Genies and reveal how Aladdin’s Genie ended up enslaved in the lamp. Although Genies is only in the early stages of development, the long-term plan is to have the project lead into an Aladdin live-action movie.

Disney is obviously moving forward with a trend: take their classic animated adventures and give them a live-action adaptation and so that is what they are doing with Aladdin. Genie is a beloved character so, maybe this could draw a crowd.