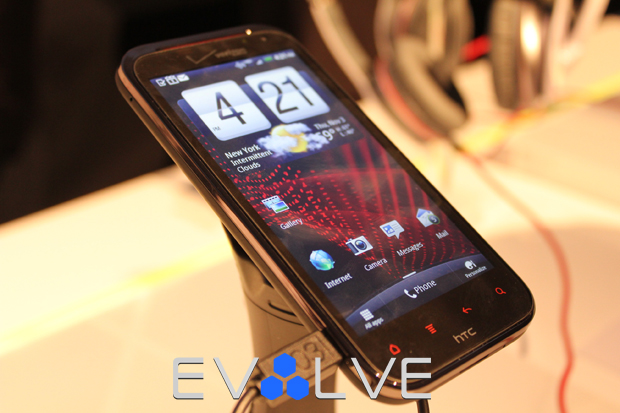 Last Thursday, we we’re invited to the HTC Showcase in Midtown, Manhattan, where the mobile manufacturer introduced the first US smartphone with Beats By Dre audio integration: the HTC Rezound. Shipping Ice Cream-ready, 4G-enabled, powered by a 1.5GHz dual-core processor, and bundled with Beats headphones, the Rezound sports a spec sheet that to say the least, is music to our ears.

After sitting with HTC Exec Jason Mackenzie and Beats By Dre COO Luke Wood for an exclusive interview, to discuss the partnership and Rezound marketing strategy (which you can read here), we got our hands-on with the device and chopped it up with industry experts Russell Holly of Geek.com and Zev Green of The RoadMap.TV to get their impressions on the mobile powerhouse. See what they had to say and take a look at our exclusive HTC Rezound Showcase gallery below.

“It’s a pretty obvious evolution of the Incredible line. The fact that it’s Ice Cream-ready hails to the fact that HTC and Google have probably teamed up a little bit on this device in the hopes that this would be “the next” of the Nexus line, and then Google went with Samsung. It’s definitely an 8 out of 10. It’s a solid device. Not really happy that it comes with 51 apps preloaded. And historically, the Sense operating system has lagged down over time. So it’s nice and fast now, but I’d be interested to see how it looks and feels in three months and exactly what that processor is gonna be able to do.”

“So it looks good. I’m super psyched. No. 1: $299 for a phone that has some decent headphones, not some crappy nonsense–they’re really good headphones. Between the processing unit and the headphones themselves, I think it sells the phone for sure. An 8MP camera and 720p display with 1080p video, I think it’s solid. Creative wise, the elements are there from Beats, I would say a solid 8 (out of 10) in the design. The red elements tweak it up a little bit from the Beats brand.”