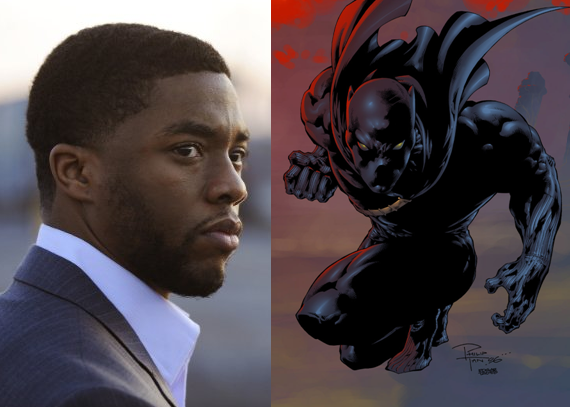 After years of trying to get a Black Panther movie off the ground, Marvel Studios has finally given the green light for the project, casting up-and-coming actor Chadwick Boseman in the title role and placing the film in the Phase 3 lineup of the Avengers Initiative. The star of Get on Up and 42 recently discussed how Marvel recruited him to play the hero-king of the African nation of Wakanda, his experience with comic books, meeting Robert Downey Jr., and what he is looking forward to the most regarding what lies in store for T’Challa in Captain America: Civil War and the solo Black Panther outing.

I wasn’t, like, a fanatic. I definitely read comic books, but this particular character was not someone that I knew very well until the last 10 years or so. I’d heard of him, but I hadn’t really been like I’m a huge Black Panther fan. I think once you get into the film business, though, you start thinking about things that would be really cool to do, and then I fell in love with [the character]. For me, that’s going to be the case for most people who watch it, for most people who see this character emerge inside the Marvel world. And it’s the right time for it, at the end of the day. It’s the right time for the character to emerge and to have his own life, so I’m really, really excited for it. And I just feel it can be done the right way right now.

Other tidbits regarding the interview with the 37-year old rising star include his background in acting and directing, his hometown of Anderson SC, his experience in the television and acting industry, the negotiations between Marvel and Boseman regarding the role, his experience meeting the Iron Man star as well as Chris Evans and whether or not he wore his Black Panther uniform yet. For the record, he hasn’t tried on the outfit yet. Still, he is in no rush to wear it considering he doesn’t have to suit up for it until production of Captain America: Civil War begins around (I think) mid-to-late next year.