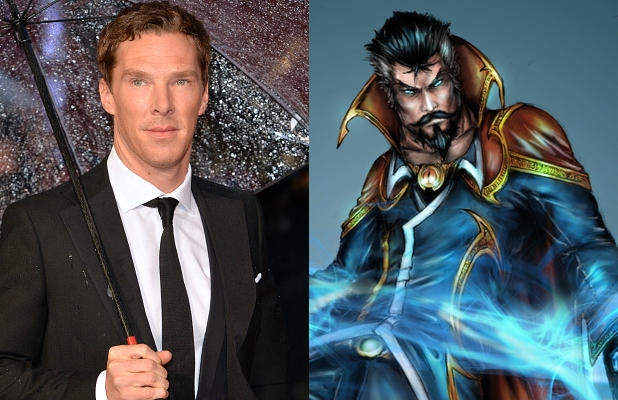 He’s Sherlock, he was Khan, he had a career year in film in 2013, he’s probably going to be nominated for an Oscar in a few weeks, and by next year, he’ll be a new member of the Marvel Cinematic Universe. I’m talking about Benedict Cumberbatch. After the dust settled after the fallout of not landing Joaquin Phoenix, Cumberbatch was the last actor standing to land the role of Marvel’s Sorcerer Supreme, Dr. Strange. Set for release in 2016, Cumberbatch will star in the Phase Three installment of the Avengers Initiative directed by Scott Derrickson and written for the screen by Jon Spaiths and the actor couldn’t be more enthusiastic about joining the successful and exciting franchise Marvel is creating.

Even though Dr. Strange is set for release down the road, Cumberbatch is already immersing himself into the mindset of his character, researching what makes Stephen Strange tick the only way he can: he’s reading the comics.

There weren’t many comics in my household — [in a self-mocking voice] “I’m so deprived.” We didn’t have Marvel so much. But you can bet your bottom dollar I’m reading them now, avidly.

The star will keep himself busy for the foreseeable future. He’s probably preparing for his Oscar campaign and he’ll be apart of a theatrical production of Hamlet and he’s working on a Sherlock Christmas special, but he is certainly dedicated to doing justice to Dr. Strange.