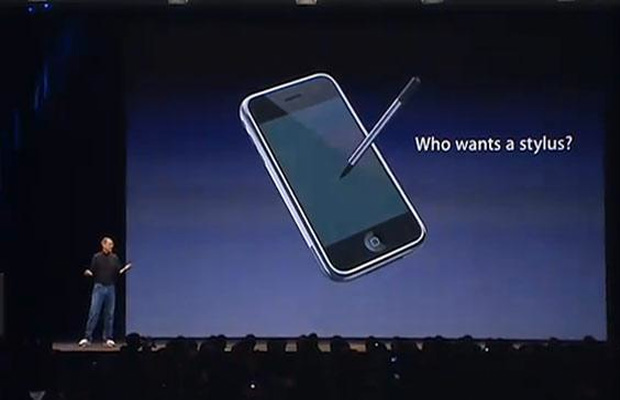 Back at MacWorld 2007, Steve Jobs dismissed the idea of a stylus being used for mobile devices when introducing the first-ever iPhone to the public. “Who wants a stylus?” he said to the crowd. “You have to get’em, put’em away, you lose’em, yuck. Nobody wants a stylus.” The tech visionary took his hate of the digital pen to another level by targeting Microsoft’s idea of a tablet with such an add-on in the Surface, which was shared with biographer Walter Isaacson: “As soon as you have a stylus, you’re dead.” Guess

Well, dude, must be spinning in his grave right now, as Apple recently filed a patent to possibly create a stylus in the near future. We say possibly because not everything the company patents makes it to the production floor. This could be seen as a move to keep up with the market demand for larger screens and accompanying accessories (ala Samsung Galaxy Note). Nothing new on Apple’s end, since the manufacturer has been jumping into several market consumer lanes that it’s bashed in the past such as phablets.