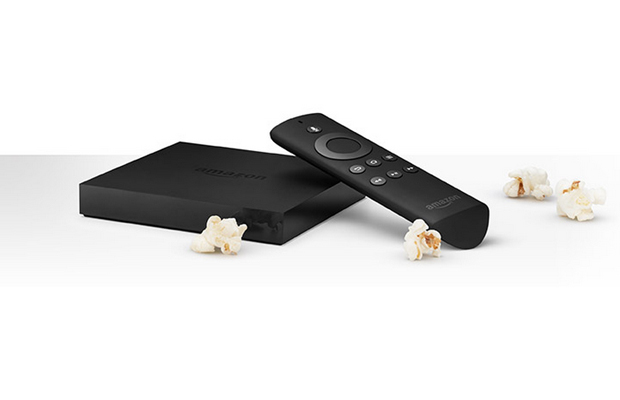 Stepping its foot into the video hardware market, Amazon introduced its new set-top box dubbed FireTV, which serves as a media-streaming and gaming hybrid machine. The announcement was made during a launch event in New York City with Amazon VP Peter Larsen playing host.

The small flat box bears an exact resemblance to AppleTV and comes bundled with a remote control, though its biggest feature looks to be voice search—allowing owners to speak into the remote to seek out content. Under the hood lies Qualcomm’s Snapdragon 600 quad-core processor, 2GB of RAM, and dedicated GPU to enhance the gaming experience. Granted the FireTV will support popular streaming services like Crackle, Hulu Plus, Netflix, Pandora, and YouTube, it will not have access to HBO Go or Vudu for the moment.

Being a gaming console as well, the box welcomes a number of titles from different studios including Disney, EA, Mojang, Ubisoft, and more. Many of the games are said to be free, where as the average price of paid titles will be $1.85. Whether the company’s rumored Bluetooth gamepad will be offered in the near future as an add-on remains unknown. FireTV also features a predictive engine called “ASAP” that pre-loads content it thinks you’re going to watch, starting without any buffering or loading time.

Amazon is selling FireTV right now for $100, with the remote controller running an additional $40.

Related: Amazon TV Box Could Double as Gaming Console & Feature This Bluetooth Gamepad
Related: This is What Facebook Could Look Like Using Oculus Rift (Video)