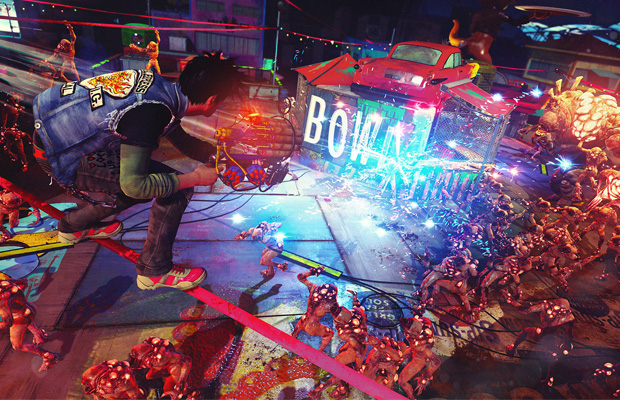 As a new week is upon us, we take a look at a new major release coming to the achievement universe. This time, it is the new Insomniac Games Xbox One-exclusive, Sunset Overdrive. The game is coming into high expectations and this open world, goofy apocalyptic game will hopefully prove to be a great success. So what are the achievements like?

Quickly, for those wondering, no there is no trophies attached to this as it is an Xbox exclusive. I know that is obvious but if you are like me and you googled “Sunset Overdrive Trophies” you get a message that is not so nice.

Anyways, so the achievements for this game are actually rather peculiar. While there are the standard killing achievements like “Orange Soda,” there are some curve balls like “Ultra Mega Kill” ; this achievement simply says “That was a lot of pigeons.”… What? These kind of achievements can be a lot of fun discovering and amazingly annoying all at the same time. While they don’t spoon feed you directions, the achievement does lend itself to be a story driven achievement. Maybe the pigeons are a clue!? I love those achievements.

Moving on from the confusing, there could be some difficulty to the achievement “I Should Get Paid For This”. This achievement has you beat the Insomniac teams high score in a challenge. We don’t know what the challenge is yet, but anytime there is an achievement to beat a previously set high score, it is going to be annoying.

Along with this score breaking achievement, the Chaos Squad achievements could prove to be difficult for those who aren’t as patient as the game would need you to be. Surviving for a long time in a difficult manor can always be difficult and challenging for the restless.

Overall, Sunset Overdrive features a helluva lot of small point achievements, rather easy to follow ones at that. A lot of them feature killing and a lot of them feature story driven content so don’t be surprised to hit around 70% complete just by finishing all there is to do in the game. This achievement list will have you farming a bit and certainly will take you for a ride while you grind to kill the OD but will never challenge those looking for just a good fun ride.

Look for Sunset Overdrive to not only be a fun and interesting new IP, but also a fairly straightforward set of achievements to unlock.

Sunset Overdrive comes out on October 28th to the Xbox One.

Not So Secret Ingredient (25G)

Defender of the Realm (20G)

Chaos in the Old Factory (25G)

Chaos in the Harbor District (25G)