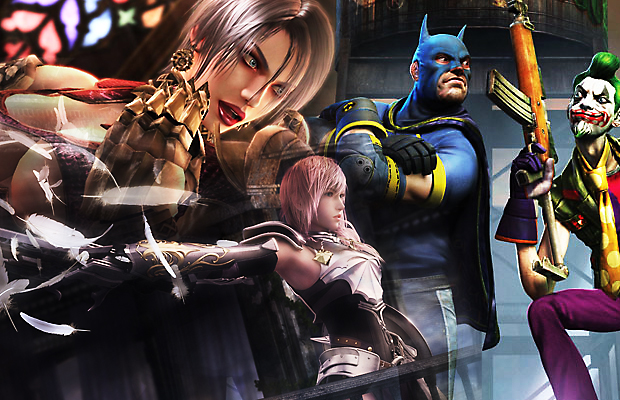 OK. The holidays are done with and most of our Christmas cash was spent on 2011’s best games. You know, Uncharted 3: Drake’s Deception, Legend of Zelda: Skyward Sword, Skyrim, and yes, Rayman Origins. But as you sit on spare change or store credit after trading in these titles, you ask the next question big: What games are worth purchasing in Q1 2012? It’s no shocker that January is the deadest month of the year when it comes to big game releases. Things done changed in the 2-0-1-2, as Namco and Square Enix ready its biggest franchises for the winter, while other quality titles make its way into retail and online outlets. In fact, we selected a handful of titles well worth the purchase. Get a glimpse of the 5 Must-Own Games For January 2012.

Release Date: 1/10/12
The multiplayer-only team-driven FPS takes place in the crime metropolis better known as Gotham City, where gamers can play from the perspective of two different teams: each trying to kill each other. On one side you control Batman, and on the other Gotham’s most ruthless villain, the Joker. Up to eight players join in the chaos simultaneously, customizing their characters in terms of costume and outlandish gadgets such as a jack-in-the-box-like grenade and glider wings to hover over the city. Just to be clear here: Gotham City Impostors is no Modern Warfare substitute. But with its quirky conceptualization and open customization, it certainly has enough facets to keep you entertained, primarily DC fanboys.

Release Date: 1/24/12
In 1999, a new age of horror dawned upon us, and its name was Silent Hill. Konami’s scare fest left gamers petrified and was able to stand toe to toe with its biggest competitor, Capcom’s Resident Evil series. Suffice to say, the franchise has down incredibly well 13 years later, and as we anticipated the eight installment, Downpour, we get a retrospective look into the past as the series two most successful entries get the HD treatment: Silent Hill 2 and 3. Other than the revamped graphics and new voice, not much has been brought to light in terms of enhanced gameplay mechanics or structure. That doesn’t take away from us wanting to revisit the horror classics.

Release Date: 1/31/12
After a three-year hiatus, the Soulcalibur series slashes its way back onto the scene with a fifth installment. The 3D fighter picks up 17 years prior to the events of the last game and promises a couple of game-changing upgrades in the form of a new game engine, stunning visuals, and a few of Easter eggs. Developer Project Soul promises combos will be much easier to execute and more approachable for newcomers, while expecting some new characters to be featured in the roster including Ezio Auditore from Assassin’s Creed. SCV should definitely hold up well against other 2012 fighters like Street Fighter X Tekken.

Release Date: 1/31/12
Square Enix epic sequel continues where the last left off, except Final Fantasy fiends can expect a few new gameplay mechanics, like a buffed up combat system, which now includes quick-time events and allowes players to enlist over 150 monsters in battle. Insane. Granted FF games are a must for all RPG enthusiasts, XIII-2 delivers a number of incentives including multiple endings for those willing to clock in more than 100+ hours in gaming. And if you’re new to the franchise, it’s never too late to jump into the fantasy world that millions have already been captivated by.

Release Date: 1/31/12
We’ve covered NeverDead before in our Life After Gears: The 5 Craziest Third-Person Shooters To Anticipate feature. So of course it was going to make our list of must buys, especially since Konami pushed up the date. Control the very comedic demon hunter Bryce, who’s suffered the curse of immortality by the demon king nearly 500 years ago and hunts monsters for the simplest of pleasures: money and revenge. What makes NeverDead such a standout, yet bizarre action title is its gameplay mechanics, which lets gamers lose and detach limbs, using each part in battle until fully generated. Just imagine how much fun that’ll be when solving puzzles. Let’s pray Konami doesn’t f*ck with us last minute and delay it, again.