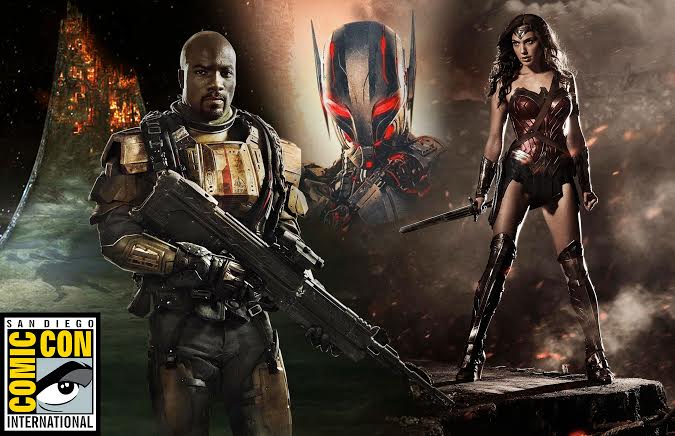 A horde of heroes, villains, zombies, video game characters and scantily clad females descended on San Diego this past weekend. No, this wasn’t the latest Zack Snyder casting call. It was Comic-Con 2014—the annual convention of the geek world where the awesomely awkward and wonderfully weird come full surface to take part in the latest attractions from the comic book, film, and gaming realms.

Why the big hubbub? Well, aside from SDCC being one of the coolest events around, the powers that be in the geek world tend to save their biggest announcements for the convention, in hopes of riling up ravenous fans into frenzy before launching their projects. If you weren’t lucky enough to get a ticket or make the West Coast trip, don’t worry. We got you covered. Here is a look at some of the biggest news stories from San Diego Comic-Con 2014.

Halo: Nightfall finally Sees Daylight, If Only A Peak

Since the announcement of a live-action show based on Microsoft’s blockbuster game franchise, Halo, fans have been anticipating a first look at the project. Well, this was one time Microsoft didn’t disappoint, as the company released a trailer for the Ridley Scott-helmed series. Halo: Nightfall will focus on the discovery of a fragment of the Halo ring from the first game on a backwater colonial world, as well as tell the origin of agent Jameson Locke played by Matt Colter. All of which have a huge part in the upcoming Halo 5: Guardians. Part prequel, part superhero origin,

With all of the announcements and costume shots, the team working on Batman v. Superman: Dawn of Justice has done a great job building the hype for the highly anticipated Man of Steel sequel. But, finally at the Warner Brothers Panel, fans were able to answer two questions that has been on everyone’s lips. What will the movie look like? And what will Gal Gadot look like as Wonder Woman? For the latter, Zack Snyder, who has been doing a lot of self-promotion via social media, gave us a first glimpse of Gadot in her super heroine attire. As for how the film looks, that was answered when the first official teaser was shown, which included Batman donning an armored cowl as he unveils the bat signal and turns it on to find a menacing-looking Superman hovering in the middle of the bat signal with his heat vision flaring. Sound promising?

The World of Warcraft Trailer Breaks Free From Azeroth

Legendary Pictures surprised those in attendance at its SDCC panel by showing an exclusive peak for the long-awaited Warcraft film. From what we saw, the movie based on the hugely popular MMORPG will serve as an origin story for the series, with the teaser focusing on the Alliance and the Horde. Fans also caught a glimpse of Lothar the Alliance Hero and Durotan of the orcs. The first look went over well, with lots of sword play and magic shown in the footage, but unfortunately, word on when the teaser will hit the public was less than forthcoming. Meaning those who didn’t get into the panel will most likely be waiting a little longer to check it out.

While the announcement of Tekken 7 came at EVO 2014, franchise producer Katsuhiro Harada waited until Comic-Con to share some details of the upcoming fighter. Probably the most important of the few details he gave was that the sequel would wrap-up the Mishima clan saga and answer questions that have been baffling Tekken lovers since day one. So it looks like we will finally get some answers as to why Heihachi is trying to kill his grandson and who the heck Devil Jin really is. Other tidbits include the game featuring one-on-one fighting and having a number of guest artists working on character designs including Ninnin (Duel Masters) and Mari Shimazaki (Bayonetta). Shinji Aramaki, who worked on Appleseed, Halo Legends and Captain Harlock will be directing the game’s opening cinematic.

To kickoff their Comic-Con presentation, Marvel placed all attention on their smallest Avenger, with perhaps the biggest job movie wise: Ant-Man. Attendees got the opportunity to see some film footage that was shot in the form of an action sequence, which finds our diminutive hero getting his first job and acclimated to his new powers like convincing a fly to give him a lift. The other major announcement coming out of the panel was the confirmation (after months of being evasive) of Evangeline Lilly joining the project and playing Hope Pym.

Legend of Korra Being Pulled Off of Nickelodeon

Shocking news emerged from the Nickelodeon camp, as The Last Avatar spin-off, The Legend of Korra was said to be pulled from the network. It was announced that the show, currently in its third season, was finishing up its season online. The last five episodes of Book Three will be premiering online as the show has been pulled off of the network’s schedule. Citing that it has a larger following online than on-air, the studio feels the move makes most sense to the network. Fans shouldn’t be worried though because it was reiterated that the show is NOT being cancelled and Book Four is currently in development.

If you’ve watched the classic HBO series, you know that getting the axe is part for the course. So not getting attached to a character is usually a prudent option. At the recent Game of Thrones panel, HBO announced that Dorne will play a significant role this season as Doran Martell, Trystane Martell, as well as three Sand Snakes (the nickname for Oberyn’s daughters) have all been cast, along with Cersei’s daughter Myrcella being recast. But the name that everyone was waiting for was Arianne Martell, who seems to have been forgotten. Arianne, who in the books is the heiress to Dorne and a principal figure in many of the plot twists, was not mentioned, while the rest of her family has already been cast. Even more ominous is that Trystane’s bio names him heir to Dorne. Also missing is her lover Aerys Oakheart. Arianne’s role as a strong complex female would have been a welcome reprieve to the sometimes overly sexualized 9 kingdoms and might serve to lighten some of the heat the show has received as of late.

Guardians of the Galaxy 2 Announced

Maybe a bit expected, especially since the first film is garnering such critical praise, Marvel made the announcement that a sequel to Guardians of the Galaxy has already been green-lit. Many might see this as a bit bold of a stance since the franchise doesn’t really have the well-known names of other films from the studio. Plus the fact that it hasn’t even released yet might raise some red flags. But if anyone has the cojones to pull it off in advance, best believe it is Marvel. Guardians of the Galaxy 2 is slated for release on July 28th, 2017.

Legendary Pictures took a gamble with their Godzilla remake, especially after the lukewarm reception from the Matthew Broderick revamp. The wager certainly paid off so much that the studio is looking to double down on the king of monsters. Director Gareth Edwards is signed up to helm the sequel and early word is that the next installment will be larger than the first. According to the studios Twitter account, one of several fan favorites like Mothra, Rodan and King Ghidorah will be joining Godzilla on screen in the future. Now if you’re a Godzilla fan like most, it would make more sense for it to be Mothra or Rodan with King Ghidorah—if they stick to the franchise lexicon. Nonetheless, we’re excited to see the return of the reptilian god.

What would Comic Con be without some Avengers news? Details on the upcoming Age of Ultron were shared during the Marvel panel, which didn’t disappoint. While not too much was revealed about the sequel, the teaser shown gave attendees their first glimpse of some familiar faces, as well as new one, and of course, Ultron. The preview begins with the Avengers all trying to lift Thor’s hammer unsuccessfully, when Ultron crashes the party. Next are some great action clips, a quick look at Quicksilver and Scarlett Witch, and even Iron Man’s Hulk buster suit.