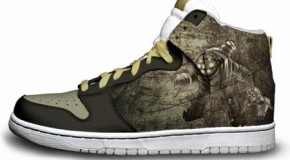 Look what Brass Monki decided to unravel during their recent trip to the underwater utopia of Rapture. Size 10 1/2 please—Chop, Chop!

All the enticing plot twists, including the strong coalesce of gameplay mechanics and exploration embodied the stellar outing that was 2007’s Game of the Year—BioShock. If you missed or forgot the first entry, let

Rapture welcomes you back. Here’s a glimpse at the February dated sequel to the 2008 Game of the Year

It’s been delayed till early 2010, but 2K is building the anticipation for Bioshock 2. And this trailer from PAX is sure to build off of that