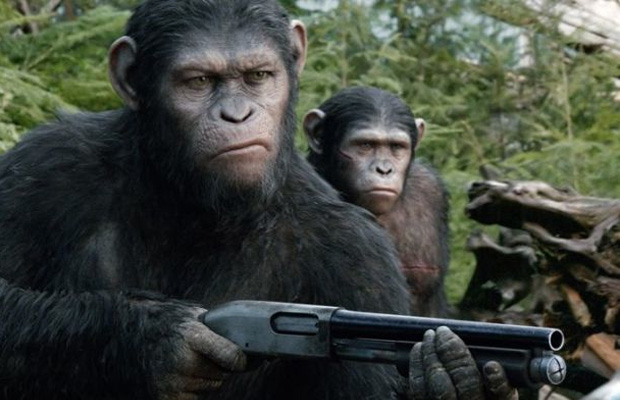 After banking nearly $700 million worldwide at the box office with Dawn of the Planet of the Apes, Fox is already planning a sequel to complete its original plans for a rebooted Apes trilogy. Director Matt Reeves is set to return, as well as star Andy Serkis, who’ll step back into the apocalyptic world as Caesar, leader of the ape army. With the previous film teasing a follow-up, Reeves went on to discuss the studio’s plan for the next film, to which he stated the following:

[We want] the story to be able to connect from the human to the ape world. So first one, [Rise of the Planet of the Apes] is this sort of how [Caesar] goes from humble beginnings to becoming a revolutionary. In Dawn, he rose to the occasion of becoming a leader, a great leader in really challenging difficult times. The notion of what we’re after in the third is continue that trajectory to how he becomes the seminal figure in ape history and almost becomes sort of like an ape Moses of sorts, a kind of mythic ascension. We’re trying to play out those themes and try to explore it in this universe of exploring human nature under the guise of apes.

Reeves expanded on details during an interview with Collider, even touching on how the events of the second film will effect the threequel:

We are outlining the story right now, and it’s pretty exciting. I’m pretty excited about it. I think for me the idea is that—somebody called this the ‘Caesar cycle’ of these films and I loved that. I thought, ‘That’s exactly right.’ He is this unique character in that he sort of was raised as human but he’s an ape, and he wasn’t part of either…This situation is exactly what he was trying to avoid. The oncoming war is what Dawn was all about avoiding and it wasn’t avoided, so what does that mean to him as a character and how will he lead his people through this—or his apes through this?