This didn’t take long now did it. The PS3 slim alone is pretty light and easily manageable, but Japanese manufacturer Hori (infamous for their import controllers) has attached a high-def 720p LCD screen on 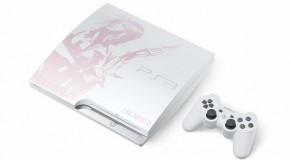 The colors children, the colors. Here’s a peak at the Final Fantasy XIII Limited Edition PS3 Slim being released in Japan this December. Is it pink or white or both? And Nintendo continues to

A site for sore eyes indeed. Sony continues to hit us with great stuff this week. First the slim PS3 announcement, now these gorgeous screens

FYE, K-Mart and Sears have already started their pre-order campaign for the new slim PS3. Priced at $299, the system’s “supposedly” hitting stores the first week of September. Sony’s looking get their numbers up

Don’t be fooled, production will not be stopped on the lackluster system, but Sony is already implementing Phase 2. They’ve done it with the PSOne and the PS2, and now it looks like the