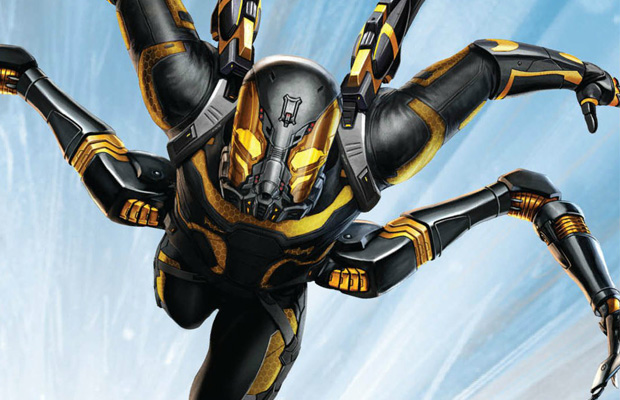 In light of recent news that the trailer for Marvel’s “Phase Two” finale, Ant-Man is likely to be released sometime in the next week, the site Comic Book Movie discovered new art for the film that reveals Yellowjacket. The image was discovered on the licensee site Aykroyd and Sons, and features the title hero as well as the villain, both suited up in their signature red and yellow. Interesting that these are the first MCU superheroes to have their faces entirely covered in costume (since Iron Man) leading to many question the possibilities of secret identity in the plot.

The film stars Paul Rudd as Scott Lang/Ant-Man, Michael Douglas as his mentor Dr. Hank Pym, and Corey Stoll as Darren Cross/Yellowjacket. Although there are no specific details confirmed about the plot, the synopsis describes Ant-Man as, “armed with the astonishing ability to shrink in scale but increase in strength” a, “con-man” who helps his mentor Dr. Hank Pym (Douglas) to protect his Ant-Man identity from future threats as they, “pull off a heist that will save the world”.  With Yellowjacket featured so prominently in the new image, it’s likely that he will be a part of future marketing efforts before the July 2015 release.