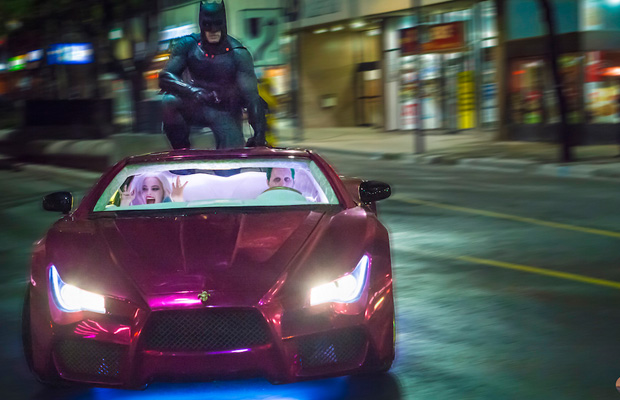 Despite the fact that social media has been swarming with photos and videos from the Toronto set of David Ayer’s upcoming DC film Suicide Squad, the director promised via Twitter that there are still plenty of surprises to come in the final product. Late yesterday, Ayer tweeted from his personal account, “Well we survived the streets. Time to go dark now. Remember, only the tiniest glimpse has been exposed. Our surprises are still in tact.”
So it is onto the sound stages for Batman, The Joker, and the rest of Suicide Squad’s cast.

Thus far, photos and videos have revealed images of Batman in action on set, Jared Leto’s Joker, Killer Croc, Deadshot, some mysterious creatures, a Batmobile/Joker chase through the streets of Toronto, and many stills of Harley Quinn. There are still several months of filming left to go: the film is expected to wrap production in September before its premier in August 2016, so there is still plenty of time for more surprise scenes to be filmed off of the streets in the ever-expanding DC universe.