Turn Up the Music With the New Spotify Equalizer Feature 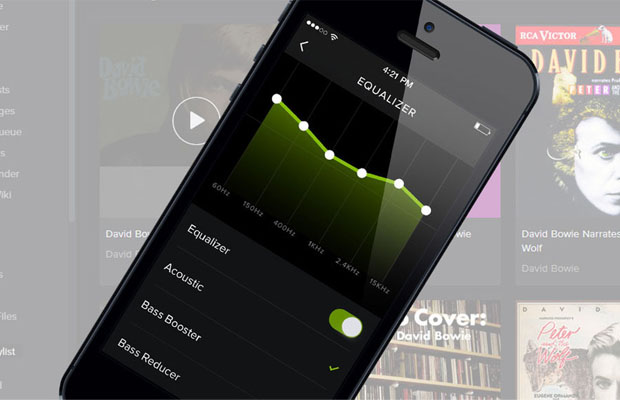 Smart people make smart moves to make people happy. So when complaints arose about the lack of musical control Spotify users experienced, the music-streaming service decided to make a change.

It’s a no-brainer that different users like different styles of music, and the way they listen to it. Depending on how music is listened to (via headphones, car, computer, or phone) songs can become really distorted and unpleasant. These are some of the reasons Spotify has re-amped their app to cater to, fix, and create the equalizer feature.

Now, more personalized settings can be made by just the dragging of a finger. The latest version of Spotify has also modified other areas. A new redesigned Artist Page on the iPad contains new release information and merchandise listings about the artist. The most pleasantly impressive update is (of course) the equalizer. With a little bit of practice, anyone can change the Acoustic, Bass, Booster, Bass Reducer, Classical, Dance, Deep, Electronic, Flat, Hip-Hop, Jazz, Latin, Loudness, Lounge, Piano, Pop, R&B, Rock, Treble Booster, and Treble reducer.

Also the Small Speakers, Spoken Word and Vocal Booster, can help create a better sound depending on what kind of device is used. These functions mimic the old settings that were in iTunes (Jazz, Small Speaker, and Treble Booster). The fancy new graph on the app, will update reflecting on your choice settings. The app also lets users exit the screen and still be able to make adjustments by simply dragging up and down on the different bars.

In the company’s official announcement, Vice President of Product, Sten Garmark said, “A lot of our users have been asking for a built-in equalizer for a while now and it’s currently one of our most requested features on iOS”. The feature is now available on iOS (only), but the Android version will follow soon.