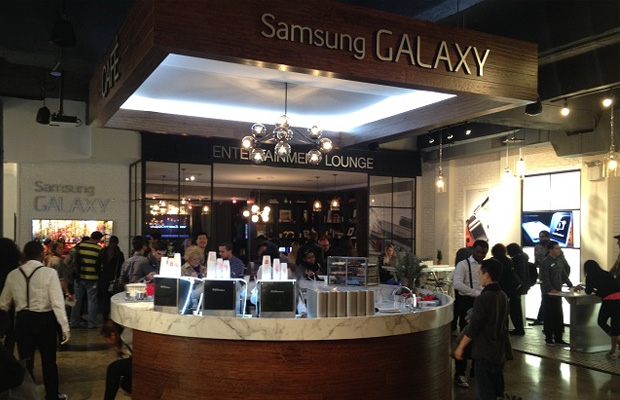 The company has created pop-up experiences in the past for for various concerts, festivals, and locations across the United States, but this time it brought the experience to SoHo section of the Big Apple to show off their next-gen mobile devices: including the Galaxy Note 10.1 (2014 Edition), Galaxy Note 3 and Galaxy Gear: Samsung’s first smartwatch.

The Galaxy Studio is filled with a number of kiosks were those smart enough to wander into the store can get their hands on with these new products and have a store expert talk them through some of the new functions of the devices. As everything is intertwined into the Galaxy experience, most tasks are tied together with the latest Galaxy lineup. Cupcakes from Sprinkles and Coffee from illy are ordered from a desert island via the Note 3’s S Beam or by using the Note 10.1’s drag-and-drop feature. Shoppers can get help customizing ornaments and mugs using the drawing features and the S-Pen on the Note 10.1 or if they’re feeling adventurous can go it alone. Shopping weary individuals can even sneak inside for a quick reprieve and go into the lounge area, which houses two large TVs that are controlled via the Note 10.1 or the Note 3’s new remote control feature. Best of all, Galaxy owners are allowed to swap out their battery for a fresh one when if near by.

The Galaxy Studio is located at 130 Prince Street and will only be open till December 31st. Take advantage of it while it’s around.