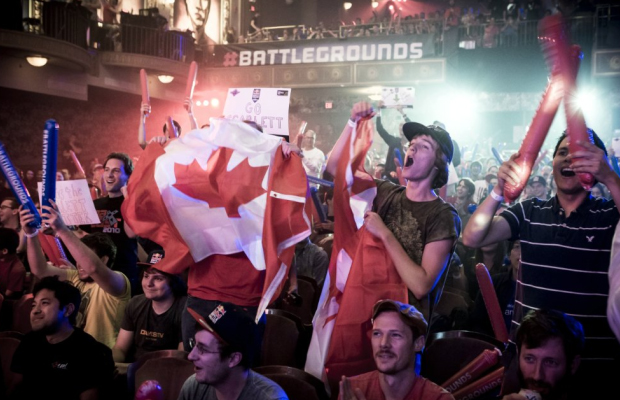 It’s been a long ride and with $20,000 on the line, an important one at that. The top 8 Starcarft II players have made it through some of the toughest games in the series.  The Starcraft II tour started off in Atlanta and Detroit, followed by the grand finals. which were held in the nation’s capital: Washington D.C. The top 8 players battled it out to see who would make it to The World Championships held at this year’s BlizzCon. This is the first time that Red Bull’s Battle Ground has been linked to Blizzards World Championships, which will be held in L.A. There’s a lot riding on this tournament, the question is, who will be able to pull through and be crowed Red Bulls Battle Ground D.C. Champion?

The first day was nothing but pure upsets. Players who we thought would make it to the grand finals with no problem couldn’t get passed players such as Trap–a new comer who isn’t well known, but after today that all changed.

Fan favorites such as sOs, PartinG, and Scarlett did their best to stay in the game, but just couldn’t pull through.

Some of the most exciting matches were between Scarlett and PartinG. The first match between the two was short and quick, within 5 minutes Scarlett took the round. She took that game and you can see on PartinG’s face he was in shock. Scarlett was on fire and the fans felt this was her time, she could actually make it to grand finals! The dream was cut short when she went toe-to-toe with Polt. She did her best and fought a good fight, but wasn’t good enough to take down Polt. Scarlett didn’t make it to the grand finals, but her fans were still proud of the way she played.

Bomber was on top of his game. He took out DRG and Polt, but the match that had everyone hyped was Bomber vs. Trap. Trap who’s a new face to the scene put up an amazing bout against Bomber, as his high-aggressive play style was too much for the new comer and was beaten by Bomber. This wasn’t the last time we would see Trap. Having to go up against his teammate sOs after taking a beating from Bomber. sOs felt like he was going to take this tournament but it didn’t go as planned. Trap took the game sending his teammate home.

As day one came to an end players that fans swore would be in top 4 didn’t make the cut. PartinG last year’s champion, Scarlett, sOs and DRG were all sent packing.

Only four remain and the question is. Who will take home the Championship? Trap known as the underdog had to play against Cure. Cure is known for not playing aggressive, but for playing smart, and he did. Trap did his very best but was destroyed by Cure. Even though the underdog didn’t win fans still cheered for him. He may have not have become the champion but he walked away with four place and a whole new set of fans.

Cure: 3-0
Second match of the day involved Polt better known to fans as “Captain America” and Bomber who is known to play extremely aggressive. The two have different play styles which makes their matches exciting to watch. Bomber played as he normally does, aggressive and took the first and second round, which made Polt play smarter which allowed him to take round 3 and 4.  Even though we saw great game play from Polt is wasn’t enough to take the win.  Bomber came back and took round  5.

Bomber 3-2
The last match of the day. Cure and Bomber faced off and each game was intense, fans had no idea how each match would turn out. Bomber who has said he plays the best when he’s aggressive did just that. A times it seemed like Bomber didn’t even let Cure breath, he moved his forces into his enemies base with such force there was no way Cure could get out of it. Though there were times that we thought Cure might just be able to take a round, but Bomber would come out of nowhere and continue to invade his base with such force and aggression that their was no hope. Fans cheered Bomber after every match. The last round came close and had fans on the edge of their seats, but it was Bomber who took the win in a sweep and became Red Bulls Battle Ground D.C. Champion!