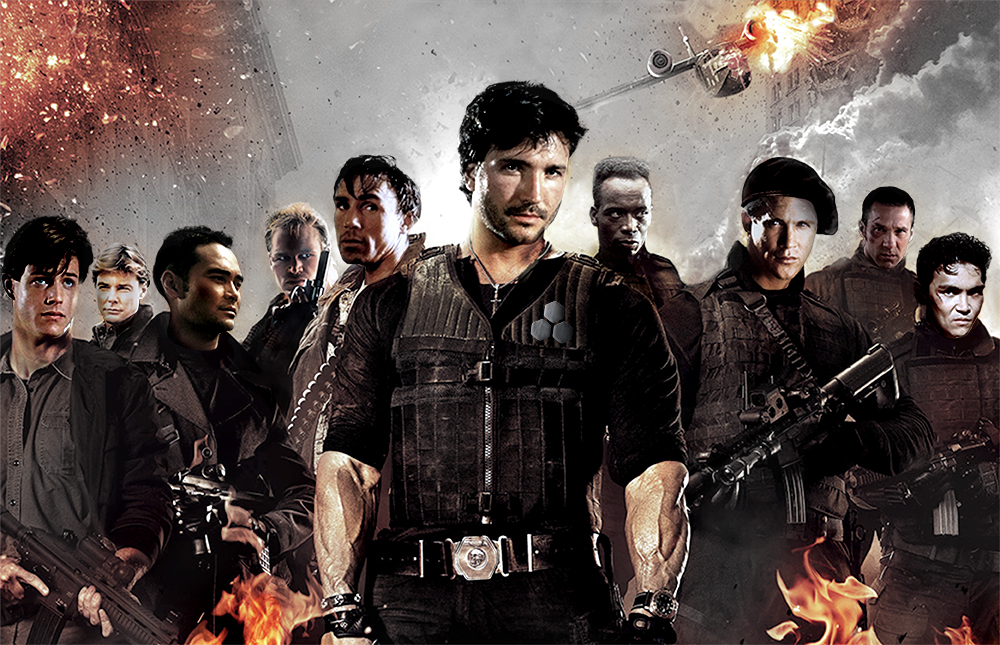 In 2010, Sylvester Stallone and writer David Callahan had an explosive idea for a film–one that brought together a notable collection of actions stars from past decades and paired three of the biggest names in the genre together–Arnold Schwarzenegger, Bruce Willis, and Stallone himself. That movie was The Expendables, and yes, it was an epic brofest of kick-ass fights, insane gunfire battles, and massive explosions. The story behind a group of mercenaries sent to overthrow a Latin American dictator, who is actually a puppet of an ex-CIA operative, oozed of b-list cliches inspired by action classics of the past. While still enjoyable, we can all agree that the cast is what made every dude on the planet embrace the franchise.

But we begged to ask the question: What would The Expendables look like with lower-tier action stars from the past? We’re talking about b-list talent who earned their paychecks starring in straight-to-VHS films or dudes who never really broke through to mainstream Hollywood, but became cult-classic favorites among their respective audiences. Think you remember these guys? You should. Take a trip down memory lane as we recast The Expendables franchise with these ’80s and ’90s b-list action stars. 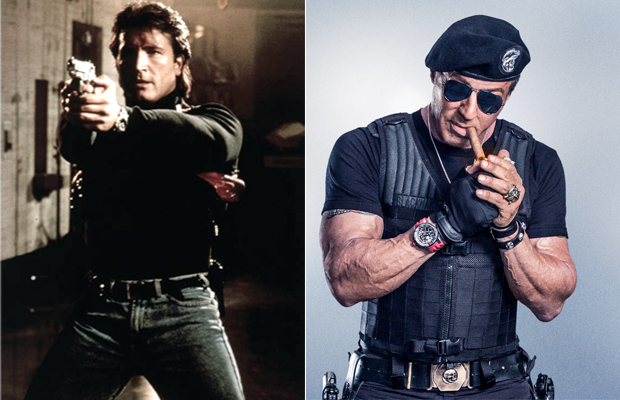 Expendables counterpart: Barney Ross (Sylvester Stallone)
Biggest claim to fame: The Perfect Weapon
For the role of Barney “The Schizo” Ross, the actor needs to be a leader and man of action through and through. Jeff Speakman fits the criteria quite well. In observing his film career, it isn’t difficult to see why he fits the bill when observing previous film roles. In 1995, Speakman portrays John Lomax, a retired special-forces trainer who decides to exact vengeance on the murderer of his sister Jenny, in The Expert. A man that embraces the eye-for-an-eye principal, Lomax can relate to Ross’ past experiences, serving as a great capo for the deadly team. 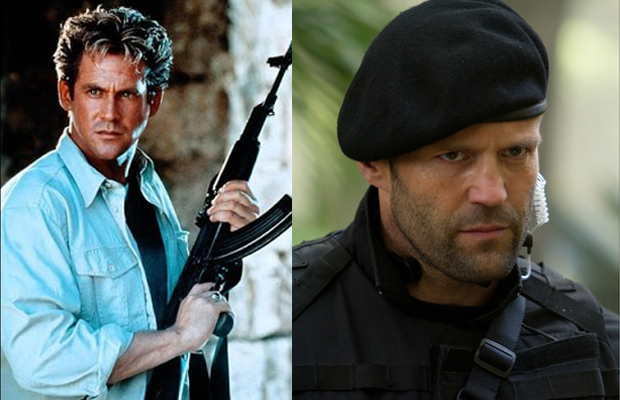 Expendables counterpart: Lee Christmas (Jason Statham)
Biggest claim to fame: The American Ninja Franchise.
Let’s consider Dudikoff the Jason Statham of his time–without the latter’s fame, but same swagger and dedication to the action film genre. Dudikoff kicked ass. The original American Ninja film featured him in the role Pvt. Joe Armstrong, an amnesiac who is an expert in ninjitsu forced to contend with ninjas as well as his fellow serviceman who implicate him for crimes he didn’t commit. Anyway, the character is somewhat similar to that of Statham’s Lee Christmas, a mercenary with a military background skilled in hand-to-hand combat training and an affinity for blades that make them extremely deadly. 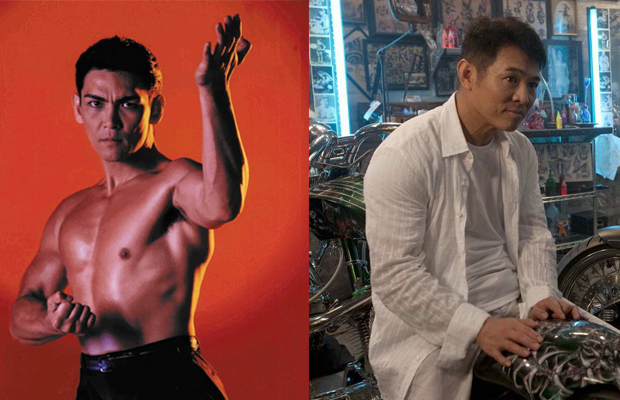 Expendables counterpart: Ying Yang (Jet Li)
Biggest claim to fame: The Bloodfist Saga
Yeah, call it typecasting, but those who’ve witnessed Wilson’s badassery know he’s an obvious choice here. Wilson is a martial arts superstar in the competitive world of kick-boxing. The Bloodfist films had him playing Jake Raye, a kick-boxer of remarkable skill who sets out to avenge the death of his brother. Raye has a sense of honor to walk away from what he has to, if he feels that line is crossed. Li’s Yin Yang, also boasts an identical sense of morality, making the pair an ideal fit. Starring in films with highly stylized action sequences adds to the argument. 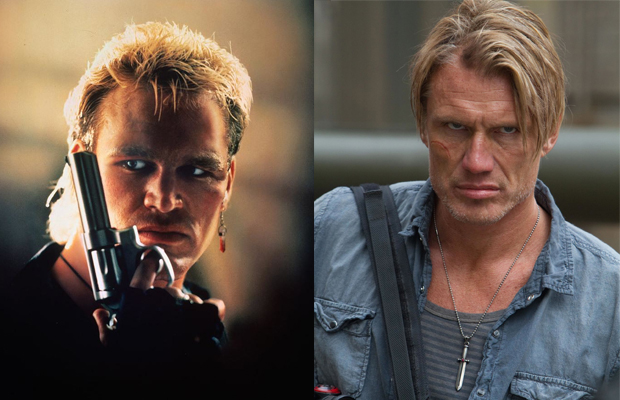 Expendables counterpart: Gunner Jensen (Dolph Lundgren)
Biggest claim to fame: Stone Cold
Brian Bosworth had a decent career in the NFL and is still maintaining one on the acting front. In fact, he’s actually appearing in The Expendables 3. How ironic. Anyway, we all remember The Boz as the buzz-cut, pistol-whipping Joe Huff in Stone Cold. He portrayed an Alabama police officer suspended due to his extreme approach on criminals that gets blackmailed into going undercover, under the alias John Stone, to infiltrate a biker gang linked to the murders of government officials. Huff isn’t much different from Gunner Jensen, tough guys who live by their own rules and ask questions last after knocking some sense into you. Also, Bosworth and Lundgren share similar physical statures. Both are tall, muscular, and certainly carry the intimidation factor. Not to mention each had that one Hollywood film that was suppose to propel their careers, but fell flat. Lundgren has been given a chance to elevate his star status in Showdown in Little Tokyo, which wasn’t received as well as the studio expected. The same happened with Bosworth in Stone Cold. 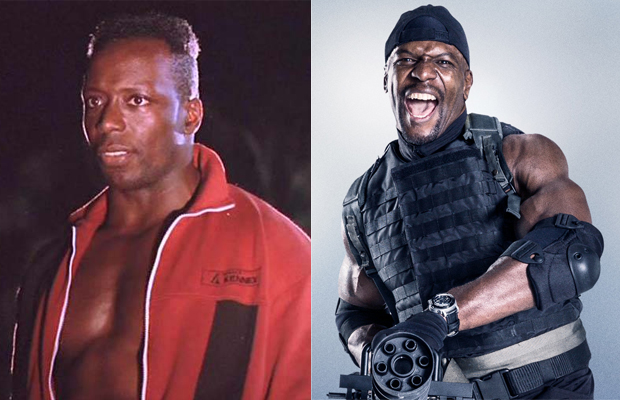 Expendables counterpart: Hale Caesar (Terry Crews)
Biggest claim to fame: Bloodfist
Crack all the Taebo jokes you want. Billy Blanks is that dude. Another typecast of course, but you can’t deny Blanks’ skill set, personality, and work ethic–all traits actor Terry Crews holds fondly. The role of Hale Ceasar could come relatively easy to Blanks because he’s not only a strongman, but a heavy-weapons specialist of sorts. Though a martial artist by nature in his films, he’s managed enough firepower in his heyday to tackle Caesar’s monstrous arsenal. 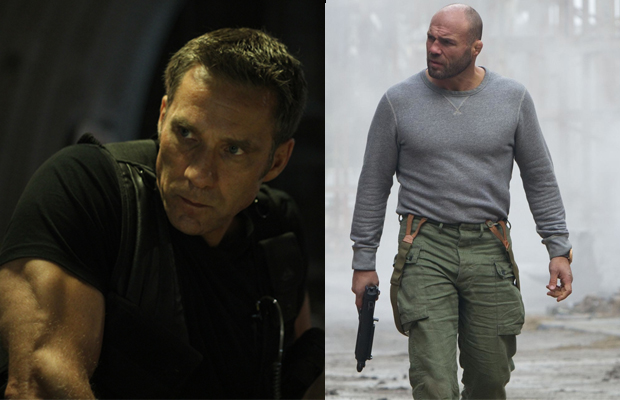 Expendables character: Toll Road (Randy Couture)
Biggest claim to fame: Recoil
Another one who ironically appeared in The Expendables, this kickboxing champ knows all about melee physicality. Something UFC legned Randy Couture knows a little something about. The work Daniels put in on the film Recoil as a LA Detective who becomes a one man army hell-bent on revenge for the death of his partners and family, exhibits his suppressed rage. Again, something the character of Toll Road has shown hints of, only unleashing it all when behind enemy lines. Interestingly enough, both actors are the same age. 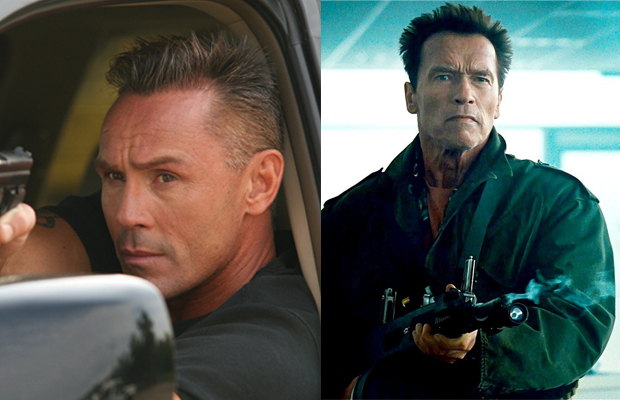 Expendables character: Trench Mauser (Arnold Schwarzenegger)
Biggest claim to fame: Angel Fist
Trench Mauser is essentially a survivor, who can handle things on his own. Gruner starred in Mercenary, playing Captain Karl “Hawk” May, a gun for hire under the employment of a rich businessman tasked with saving the businessman’s wife and killing her kidnappers. Though Gruner is essentially younger than Schwarzenegger, his experience playing similar roles, plus his military and martial arts training provide a perfect fit as a replacement. In fact, looking at Gruner’s film career, one could possibly call him the B-list Arnold. Gruner has been in the action-film business for 25 years and that has to command a great deal of respect in the biz. 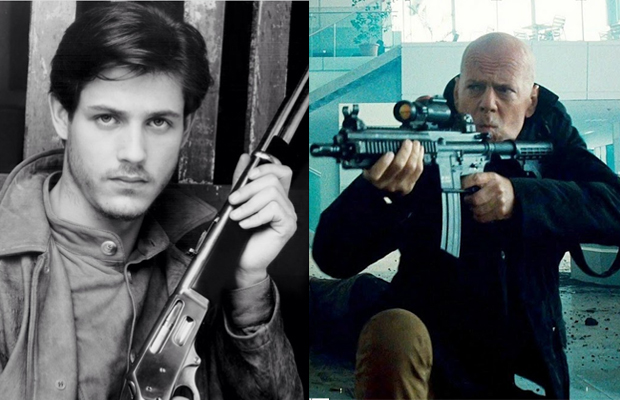 Expendables character: Mr. Church (Bruce Willis)
Biggest claim to fame: Road to Hell
Michael Parè has a looong-history of straight-to-VHS films, particularly in the action genre. Through it all, the man’s ran the gamut when it comes to action roles. Parè and Willis may be on different tiers in terms of star status, but the two carry significant resumes in the genre and share similar mannerisms, so the role of the mysterious C.I.A. operative Mr. Church wouldn’t be too much for Parè to handle. 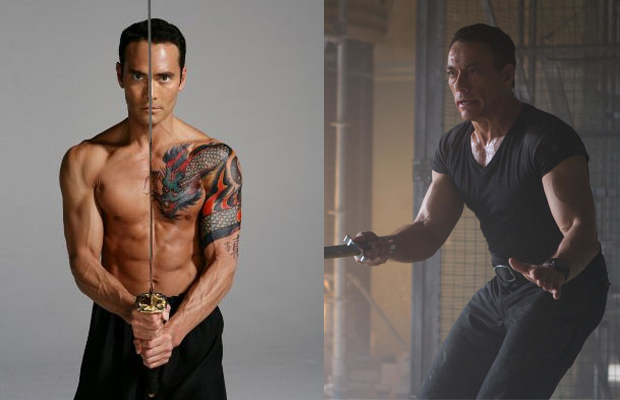 Expendables character: Jean Vilain (Jean-Claude Van Damme)
Biggest claim to fame: Only The Strong
Think we can all agree this is a slam dunk for special martial artist Mark Dacascos. The actor has experience playing both heros and villains. Though his role in Cradle to the Grave remains one of the bigger selling points here. Dacascos took on the role of an arms smuggler trying to auction off weapons of mass-destruction to the highest bidder, which is identical to Van Damme’s role in The Expendables 2 as a terrorist leader who sought to cripple the world using five tons of weapons-grade plutonium. Oh yea, the fact that both are probably the only two actors in their age ranges who can actually still pull off a split kick seals the deal. 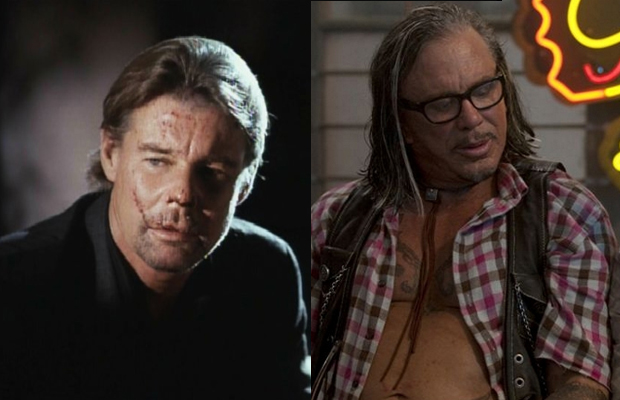 Expendables counterpart: Tool (Mickey Rourke)
Biggest claim to fame: Airwolf
Considering the parallel acting histories between both thespians, one would swear these two came from the same womb. Like Rourke, Vincent garnered famed for his rebellious roles that nearly landed him super-stardom, but found himself on the outskirts of Hollywood due to some personal demons. Standing out as a veteran who has been there and done that, seems like a perfect match to play the recruitment liaison and armorer of the group. Well, that and his facial construction.