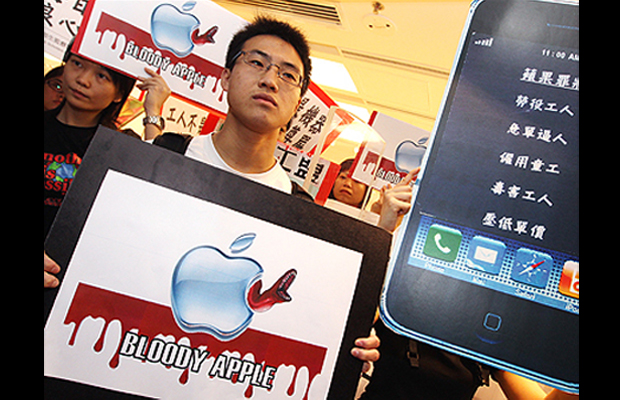 If you live in D.C, New York, San Francisco, London, Sydney, or Bangalore—and see thousands of people lined up outside the Apple Store—just know, the iPad 3 or iPhone 5 has not went on sale. Tomorrow morning at 10 am, a massive group of angry iPhone costumers will be protesting in front of Apple’s headquarters and stores across the globe in response to the reported abuse of Chinese factory workers.

Over 250,000 petition signatures had been collected from Change.org and SumOfUs, with 20,000+ users being iPhone owners and 35,000+ owning Apple products. Executive Director of SumOfUs Taren Stinebrickner-Kauffman issued a press release to Business Insider discussing the company’s mistreatment of workers in Chinese supplier factories:

“I use an iPhone myself. “I love it, but I don’t love having to support sweatshops, and neither do millions of other Apple consumers. The hip, educated market that Apple aspires to corner is largely composed of responsible consumers who don’t want to be complicit in sweatshop labor.”

A recently aired episode of Public Radio International’s “This American Life,” which discussed the worker conditions at Apple’s manufacturing facilities, exposed how iPhones were being created by young children who worked 16-hour days and earned 70 cents an hour, therefore reigniting the controversial flame Apple has tried putting out in the midst of the Foxconn suicides controversy. Feel bad for owning an iPhone now?

Newly appointed Apple CEO, Tim Cook, responded by saying, “We care about every worker in our worldwide supply chain.” In addition, Cook mentioned that the Fair Labor Association will be monitoring Apple’s suppliers. Even though protestors are happy to hear these changes, they still request Apple to release a report on the FLA’s discoveries, along with worker protection strategies for upcoming products.

Who’s up for an old-fashioned protest?