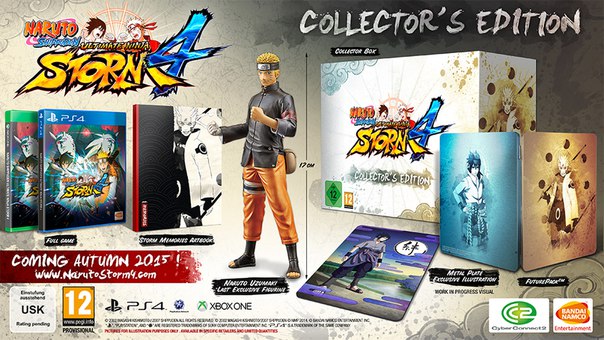 Bandai Namco has finally come out and unveiled the details behind the pre-order and collector’s edition of Naruto Shippuden Ultimate Ninja Storm 4. This special edition comes with not only the full game but an art book, a metal plate illustration, and even a special figurine of Naruto from the movie ‘Naruto: The Last’. Whereas the people who pre-order will get exclusive character skins, new characters that cannot be otherwise gotten and early access to the game. Herve Hoerdt president of marketing & Digital for Bandi Namco Europe had his own statement to add about these games:

“This year is an amazing one for all Naruto Shippuden Ultimate Ninja Storm lovers: an amazing partnership with TSUME-Art, a highly exclusive Collector’s Edition, tons of never-before-seen characters to be playable and much more to come in the upcoming months! Bandai Namco Entertainment and CyberConnect2 are looking to surpass every Naruto Shippuden game ever created and deliver an amazing video-game experience!”

Seems like Bandai Namco and CyberConnect2 are pretty confident about this new game, and by the looks of it it’s going to be a great one. Naruto Shippuden Ultimate Ninja Storm 4 will be released in America sometime in the third quarter of this year and on all systems.