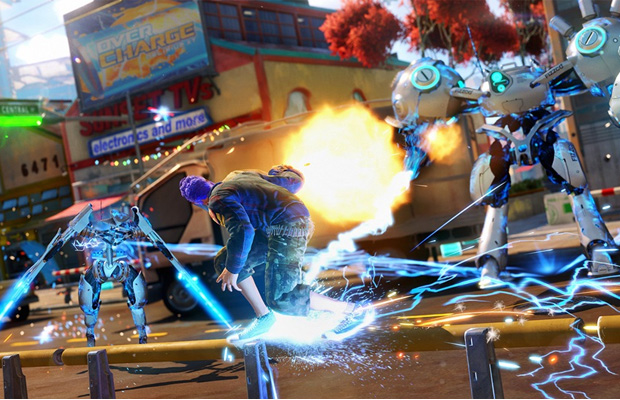 The finale of Sunset Overdrive’s amazingly insane DLC is upon us. Details and launch date has been confirmed for the DLC pack called ‘Dawn of the Rise of the Fallen Machines’, which has been set to release surprisingly on April 1st.

The main storyline aspect of this DLC is along the lines of saving Sam’s old mentor from Fizzco Robotics factory that is located towards the south. Supposedly there are a slew of new missions, challenges and various quests that take place not only in the main area, but also in the robotics factory as well, granting players the ability to explore it to the fullest and get the most enjoyment out of it.

Finally the biggest news revolving around this DLC is the brand new weapon that is being added called The Energy Ball of Death. True to its name, this tool allows players to roll around the city at high speeds and crush all things that stand in their way by means of sheer flattening power. Sounds pretty dope, though it’s just a shame that after this one there may not be more.