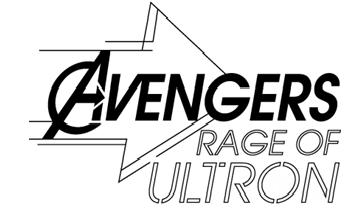 The most anticipated film of summer 2015 is hands down The Avengers: Age of Ultron. Earth’s Mightiest Heroes will do battle with an artificial intelligence programmed to save the world through the sadistic measure of bringing humanity to the point of extinction. That has always been Ultron’s mission objective in the comics. With anticipation for Age of Ultron reaching fever pitch, Marvel Comics decides to announce and promote their new graphic novel, “Avengers: Rage of Ultron.”

It was another glorious victory for the Mighty Avengers. Good triumphed over evil and Ultron was shot into space, never to be seen again. Or so they thought. Now, years later, the homicidal artificial intelligence – so long devoted to ending life on Earth – has a new world to conquer…one with its own horrific legacy. When Titan, birthplace of Thanos, falls, Planet Ultron rises in its place! Thanos’ brother Starfox must seek the aid of his former allies – but the Avengers he finds are radically different from the ones he once knew. Among them is Ultron’s creator Giant-Man – and when Hank Pym confronts his now planet-sized “son,” the responsibilities of fatherhood have never loomed so large.

Since Marvel is preparing for a massive windfall via box office, with Age of Ultron, Ant-Man and Fantastic Four scheduled for release this year, it’s sensible for the company that created these heroes to promote new material in advance at the time of the film’s release. “Avengers: Rage of Ultron” s on sale April 1st in book stores, comic shops, the Marvel Comics app (for iPhone®, iPad®, iPad Touch® & Android devices) and online in the Marvel Digital Comics Shop.