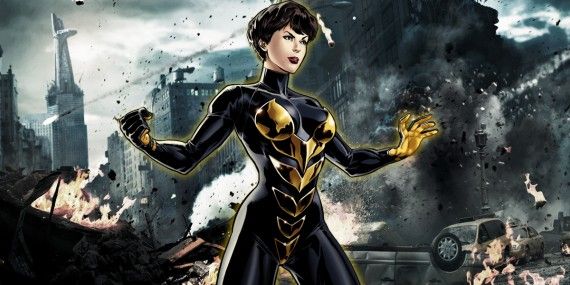 After the release of Ant-Man this past weekend, we learned more about some of the details of Marvel’s “Phase 3”; namely a specific character that it will feature: Hope Van Dyne’s Wasp. During the end credits of Ant-Man, there was a scene between scientist Hank Pym and his daughter Hope in which he shows her the Wasp suit that was originally associated with her mother, Jane Van Dyne. Marvel’s Kevin Feige spoke to Yahoo about the meaning of the scene and what it signifies for Phase 3, commenting that it is a, “birth, or rather re-birth of the Wasp,” who is a significant character in the Ant-Man mythology.

Feige also confirmed that Wasp will, “certainly [be] a part of our Phase 3” and noted that the end scene is a, “very important moment [in Ant-Man].” He explained that when people realize that in the scene, her Hank is presenting Hope with the suit, “and realizes that he can’t hold her back from what is essentially her destiny.” So when will we see Wasp next on screen? Despite the fact that Paul Rudd’s Ant-Man will appear in Captain America: Civil War, Feige said that because, “Wasp is such a huge character…We thought it would be a disservice to the Wasp to just have her show up…because there’s too much else going on in that movie.” An undetermined future for now, but a cameo will likely take place before Ant-Man 2 hits theaters.