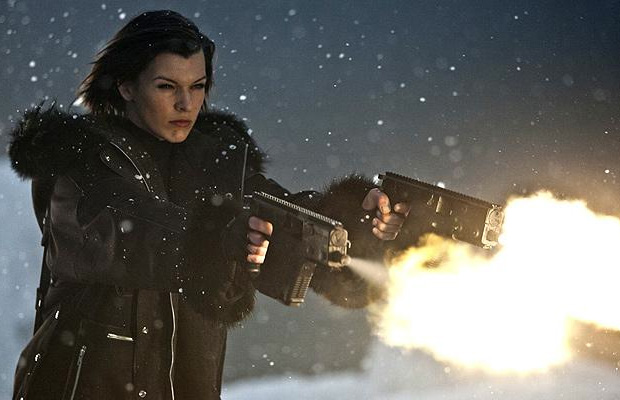 The sixth and last Resident Evil film has been delayed for over a year due to star Milla Jovovich’s pregnancy. Now that the actress has finally given birth to her second child with husband /director Paul W.S. Anderson, she has ready to step back into the character role of Alice to close out the zombie saga.

Jovovich jumped on her Facebook page to update fans on Resident Evil: The Final Chapater, which she confirmed will be heading into production this summer:

“I’m really proud of myself for not gaining the same amount of weight that I did with our first child (75 lbs.) because I have to be ready to start filming Resident Evil: The Final Chapter in August of this year and I will also be nursing an infant simultaneously (get ready wardrobe department for Alice’s new ‘easy mama access’ costume;)) so I don’t want to be on any extreme diets to get ready to go back to ‘action hero’ mode!”

Pre-production is reportedly taking place in Cape Town, South Africa will full production set to resume in the same area. Bingbing Li and Wentworth Miller are the only stars set to reprise their roles in the upcoming sequel at the moment. Resident Evil: The Final Chapter is projected to release Fall 2016.