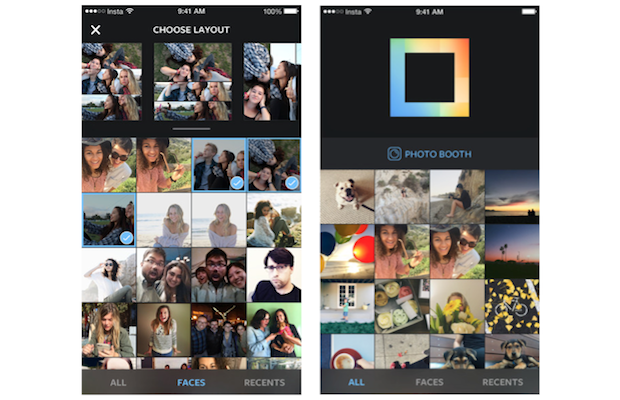 Instagram has recently released Layout, a new standalone app that allows users to collage photos seamlessly. You might be thinking: “Why do I need another photo collage app?” It’s true: the App store is already inundated with collage creators like Pic Stitch and InstaCollage. But we have to give credit where it’s due: Layout might just be the best photo collage app out there.

First off, users begin their creation process by selecting their desired photos, rather than first selecting the frame. The app then offers frame options consisting of the selected images. Brilliant.

Users can also select photos using the app’s ‘faces’ feature – the makers of Instagram have found that most people collage images of people. So, they have developed software that scans a users camera roll for family and friends, filtering out unwanted landscapes, etc.

You can also select a photo booth option. Similar to photo booths IRL, users can use the app’s countdown timer to take a series of photos that then appear in a collage frame.

With a significant amount of Instagrammers already using third-party apps to create their collages, it’s about time the makers of Instagram got the message. And boy did they get it right.