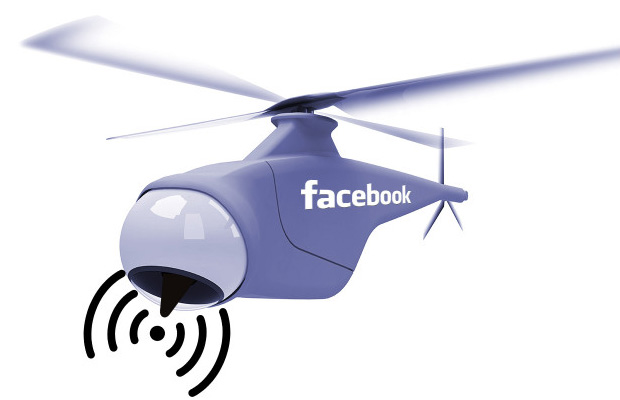 Facebook already has tendrils in nearly every facet of our lives, they want to be in the skies above as well. Their designs for the future may not be as B-Sci-fi movie-esque as you might think. The plan is to provide the next 5 billion people with an internet connection – via a fleet of drones.

Company CTO Mike Schorepfer unveiled the network’s first solar-powered drone, beaming internet access from the clouds, at today’s F8 developer conference in San Francisco. The unmanned aircraft is powered by solar panels, and has a wingspan larger than a Boeing 737, but somehow weighs less than a small car.

“The idea is to loiter across an area at a high altitude, for months at a time, beaming down internet access” according to Schroepfer, who has promised more information later this year. CEO Mark Zuckerberg says “aircraft like these will help connect the world, because they can serve those living in the remote communities, even without an existing internet infrastructure while still being affordable.

It was about a year ago that Facebook acquired the five person team of the U.K. based Ascenta, who worked on the early versions of Zephyr, the longest-flying solar powered unmanned aircraft. Fittingly the Facebook drone completed its test flight in the U.K.

Facebook seems to want to help change the connotations we have of drones. Providing internet service to so many people may not have altruistic of motives as they may believe, but it goes a long way to helping the greater good.