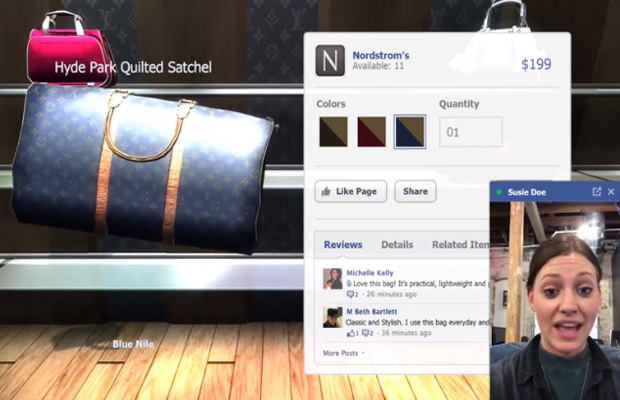 The gaming community is still up in arms over the $2 billion acquisition of Oculus VR by Facebook. We don’t blame them at all. Still, everyone is wondering how the VR gaming headset will integrate the social network into its virtual reality experience. This new concept video by Chaotic Moon Studios shows how the peripheral could possibly bring the two services together.

The video demonstrates how a Facebook user can use the Oculus Rift for online shopping on the site, while offering video chat on the lower right side of the screen. Clicking on an ad prompts the user to put on the headset to enter a 3D virtual Facebook market, where they can walk through a variety of different stores and use their hands to view an object from all angles.

Facebook CEO Mark Zuckerberg called the company’s investment in the company a “longterm bet on the future of computing,” while stating the technology “has a chance to create the most social platform ever, and change the way we work, play, and communicate.” Should be interesting to see how this turns out in the next couple of years.

Related: Experts Believe Facebook Will Die Out By 2017
Related: The 10 Biggest Gaming Announcements at GDC 2014