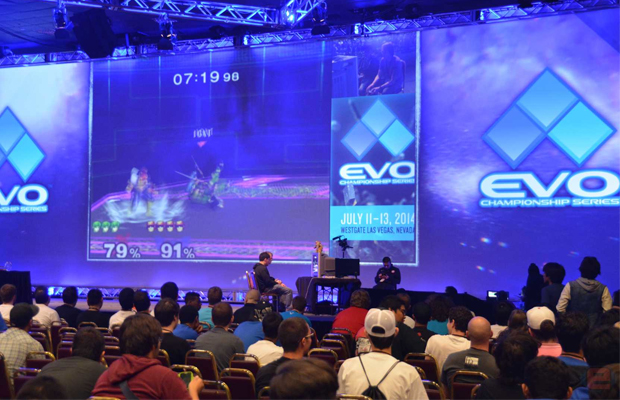 Players from around the world have waited all year for this very moment, to participate in the biggest fighting game tournament: EVO 2014. This year’s festivities saw its share of upsets, as players we were assured would make the Top 16 failed to reach that mark. It was certainly an underdog show—those we thought had no chance of surviving, but proved us wrong. Either way, it was cool to see some shock value time time out, while witnessing some of the bigger names maintain their championship status. See who walked out winners at this EVO 2014.

RG|Sonic Fox was the player to watch this year. Better know for his use of Mileena in Mortal Kombat 9, Sonic started playing Injustice and quickly made a name form himself. Players had a hard time competing against his Batgril and though he didn’t win every major, it gave him time to sharpen up his skills. Many fans didn’t think Sonic Fox would have a chance winning this tournament, as he had to go up against veteran players such as Perfect Legend, Pig of the Hut, and 16 Bit. He played an amazing game, and to all of those who doubted him, dude made sure to prove everyone wrong.

Rose winning EVO 2014? The shock that many had when MD|Luffy’s Rose took down Bonchan’s Sagat was a true sight to see. Luffy showed viewers that his character could, and would take the win. Bonchan tried his best to stay in it, but couldn’t give enough enough.

After coming so close last year, taking second place, while FS.EMP|Flocker took first, fans where hopefully Justin would be able to get that number one spot. EG|Justin Wong played a phenomenal game. His match against Chris G had fans on the edge of their seat and with the game ending 3-1, EG|Justin Wong took that winning spot and sent fans into a frenzy.

Early In the day before his match, Emmanuel, better knows as KN|RM CDjr, tweeted this to his fans: “I’ll try my best hopefully I won’t let you guys down”. He stayed true to his words. CDjr played a great set taking out RG|Rico Suave and EG|Justin Wong. This win meant a lot to the pro player as he became emotional when announced the winner.

Fans of Super Smash Bros. Melee took to social media making their predictions on who would win this year tournament. C9|Mago has won back-to-back outings in 2013 and now 2014. Mago played against Crs|Hungrybox using Fox. Hungrybox did well with his Jigglypuff as the game ended 3-2.

Garireo played a great set against Dogura, but it seemed as if Dogura’s Azrael was no match for Garrireo’s Litchi. Both played well and close game at 3-2. Check out how emotional Garrireo gets after his win.

Qanba|Xiao Hai made his way through some tough players like CafeID|MadKOF and MCZ|Tokido. The last match had Xioa and Tokido playing for the top spot. Xiao took the win in a 3-1 game. Peep the match above.

Twitch|JDCR started off strong with his team (Heihachi, Armor King), but Twitch|Gen Kids fought back with his crew (Bob, Leo). The matches became so close that fans had no idea who would take the crown. The game ended at 3-2 where JDCR became TTT2 Evo Champ.

Here is a list of the others winners at EVO 2014. Congrats to all!