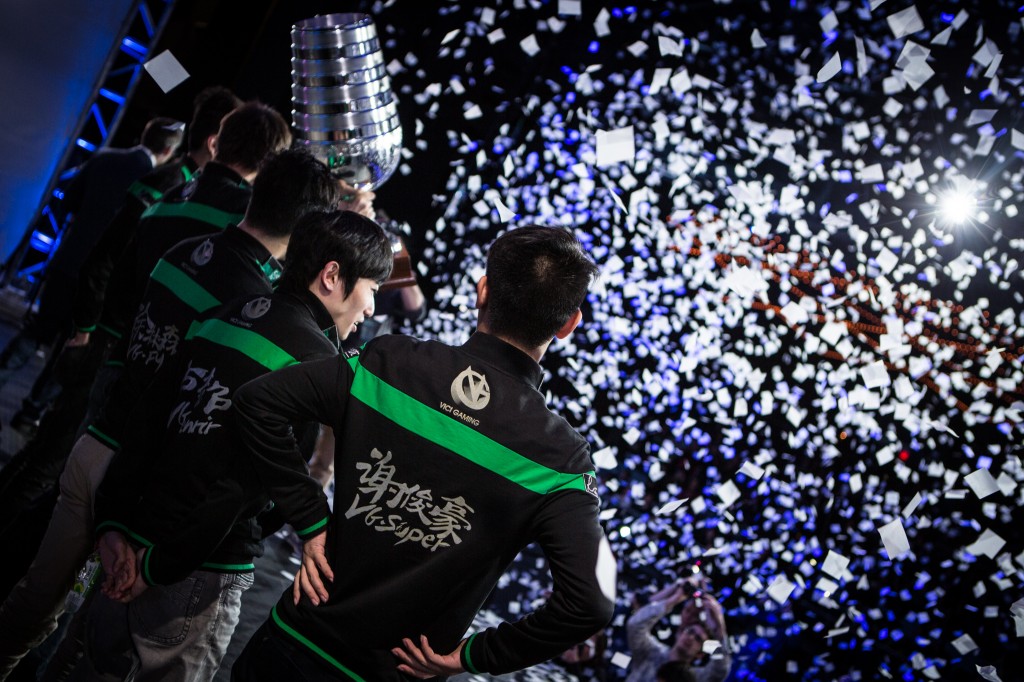 The biggest eSports tournament has finally made its way to New York City. The Big Apple has seen a couple of competitions over the past few months, but if you wanted to see tournaments in huge arenas, usually you’d pretty much have to travel out of town. States such as California, Columbus, Ohio, and Atlanta, even overseas are where you can witness thousands of fans packing in stadiums. With eSports constantly growing and becoming a very big deal for the biz, fans wanted something they could witness in their own backyard.

During the week of New York Comic-Con 2014, thanks to ESL One, one of the biggest pro gaming competitions better known overseas took part in New York Super Fan week and gathered the biggest pro teams in DOTA2 and brought them to Madison Square Garden. Fans gathered to cheer on their favorite teams in the biggest tournament New York has ever seen.

Na`Vi vs ViCi Gaming
The first match of the day started with Na’Vi and ViCi Gaming. Now what shocked fans the most was the lineup that Na’Vi went with, as it was something fans haven’t seen before. The lineup Na’Vi decided to go with wasn’t a match for ViCi Gaming over the first couple of rounds, but the team did put on a better show when it came to the second round. Even though Na’Vi showed better play in round two, ViCi Gaming took the third round and the win.
ViCi Gaming 2-1

Secret Team vs Na`Vi.US
Na’Vi US was next, and since they represented the U.S. fans were hoping they would take the game, but Secret Team made sure that wasn’t going to happen. As soon as the match started, Secret Team made it clear they were taking this win. Within minutes Secret Team took down four of Na’Vi U.S. towers down. The second match didn’t seem as easy as the first for Secret Team, as Na’Vi U.S. put up more of a fight this time around. Secret Team’s dominance in the game helped them win with a sweep.
Secret Team 2-0

Day Two
Vici Gaming vs. Secret Team
The first match of day two started with Secret Team and ViCi Gaming. Fans were a little confused when both teams decided to change their lineup. As the match played out you can see Secret Team having a hard time once ViCi Gaming started invading there base. The dominance that Secret Team once had while playing against Na’Vi U.S. was nowhere to be found this time around. ViCi Gaming took the game.
ViCi Gaming 2-0

Cloud9 vs. Evil Geniuses
Fans went crazy just to see Cloud 9 and Evil Geniuses go toe-to-toe. Both teams played extremely well so there was no telling who would take this game. Cloud9 became aggressive and Evil Geniuses didn’t know how to handle it allowing Cloud 9 to take the win. When it came to the third round it seems the tables had turned and Evil Geniuses became the aggressor, which worked out for them.
Evil Geniuses 2-1

Evil Geniuses vs. Vici Gaming
The match that everyone was waiting for. Fans went crazy as the teams took to the stage, knowing this was going to be an intense game. We saw Evil Geniuses’ aggressive game play in the first round. The teams pick offs gave them the lead in the game in which they needed. They also took down towers in a rather fast pace, making fans feel if they keep this up, they will be able to take home this win. Tables turned quickly. ViCi Gaming’s support and team fights made them able to take the first game.

Evil Geniuses didn’t take that last lost too lightly and became aggressive in game-play which allowed them to take the second game. While fans held their breath in the last round. Evil Geniuses started off as if they would be able to take this final round, but ViCi did what they needed to do to stop them. ViCi Gaming pulled off another team fight which sent Evil Geniuses into second place. ViCi Gaming was the winner of ESL One New York City!
ViCi Gaming 2-1