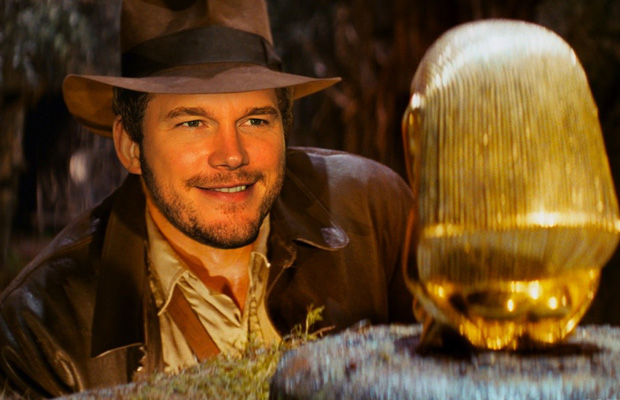 It’s a Cinderella story that shames all other Cinderella stories: Chris Pratt, affable supporting character on television’s indie darling Parks and Recreation, lands the leading role in one of the summer’s biggest blockbusters, clobbers all other competition at the box office, and sets himself up to become of Hollywood’s most desirable and, for that matter, bankable stars. What is more, he’s riding this wave of success straight into another sure-to-please franchise reboot, Jurassic World. But, miraculously, it doesn’t stop there.

Rumors are now circulating that Pratt is being targeted as the next Indiana Jones. When asked if he would put on the fedora and wield that famous whip, the actor remained rather evasive, saying that it would be an “awesome opportunity” but little else. However, in contrast, director Matthew Vaughn, the man behind Kingsmen: The Secret Service and X-Men: First Class, wasn’t so taciturn. In regard to the still-shrouded-in-mystery Indy reboot, Vaughn had this to say:

“If someone offered me Star Wars or Indiana Jones I would be very interested. When you’re the director, you just don’t know. Something clicks and you go, ‘Yup, I wanna go make that story,’ so never say, ‘never,’ to anything.”

Needless to say, a Vaughn-Pratt collaboration would be something that every fanboy would drool over. What do you think? Is Pratt the right choice to replace Harrison Ford?