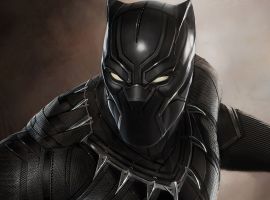 Captain America: Civil War, is one of the most anticipated films that will be released next year, partly because Black Panther will finally make his feature length debut in film. Chadwick Boseman has been tapped to play the superhero/King of Wakanda in Civil War and will be given his own solo film in 2017. For now, no director, writer or any other actor is attached to the upcoming Black Panther feature, except for the possibility of Andy Serkis playing T’Challa’s archenemy Ulysses Klaw, but that should come as no surprise because the film doesn’t begin production for nearly a year and Boseman is still considering the possibilities of what the character is capable of.

It’s a brainstorming phase, trying to figure out what it looks like — I’m going to be as vague as I can! — what it looks like and what it should feel like in certain moments. But just going through [the material], because there’s always a difference from one story to the next of who he is — trying to find a way to merge those things together. Because I think that’s always fun when these movies work: it’s when people see several things satisfied at one time. And I think that’s been the fun part so far.

There is no doubt that the world is waiting to see Black Panther in action. Even though T’Challa’s introduction will come against the backdrop of Captain America and Iron Man not exactly seeing eye to eye in Civil War, fans of the Black Panther mythology believe that Boseman will do justice to the role.