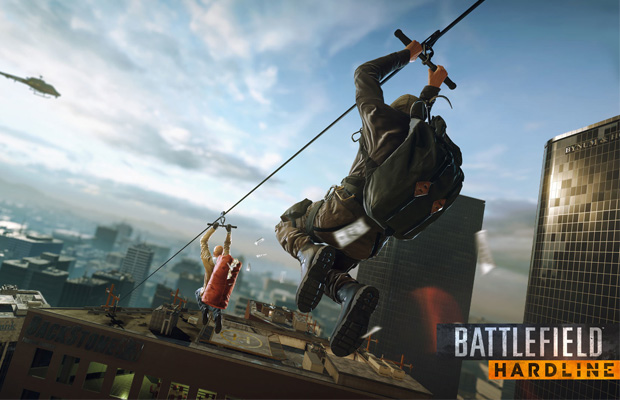 As E3 2014 is about to kick off, some revealing news revolving the release of Battlefield: Hardline just hit the net, which is being attributed to a leaked trailer. The visual shows off not only the scintillating info of the game’s release, but also the aesthetics and locations the game will use—that being of an urban setting rather than the standard war-torn military style the franchise is wel known for.

The trailer gives people a link that would reveal a five-minute video showing off the game’s multiplayer mode, which seems to be cops-and-robbers styled with modes called Heist, Rescue, Hotwire, and Bloodmoney. Within the last week since the trailer’s release, developer Visceral has officially announced the Hardline’s release, as well as another trailer, which reveals some details pertaining to the game’s storyline: Detective Nick Mendoza must go all over the U.S. to capture his rogue ex-partners.

The most intriguing part of this leak was the PlayStation logo placed at the end of the trailer, which indicates the trailer may be officially released at the Sony E3 press conference, or published on Sony’s website. This info conflicts with the fact that Battlefield 4 was released at Microsoft’s press conference last year, and its DLC being an Xbox exclusive. However, recent versions of the trailers have removed the PlayStation logo, so who knows what this could mean. The game is scheduled for release on October, 21, keeping with EA’s other late October release dates.

Related: Battlefield: Hardline Will Be A Police-Themed Shooter
Related: The 12 Most Anticipated Games of E3 2014