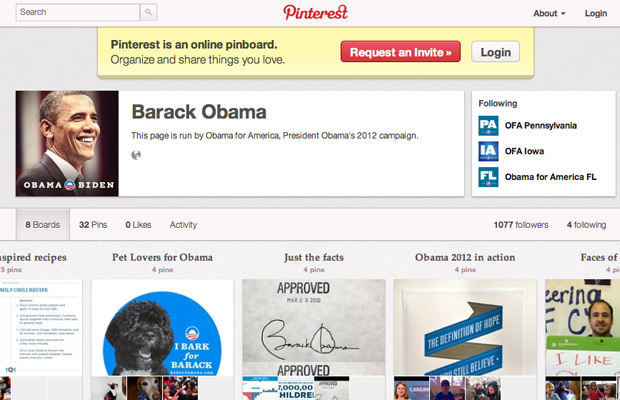 We all know the President of the United States is a devoted social media user. He’s used Facebook and Twitter to help spread his message and push his presidential campaign back in 2008. Well, you can add the hottest photo-sharing outlet to his list of viral outlets, as the Barack Obama Pinterest account becomes officially official after posting its first pins this afternoon.

Obama’s profile had been set up for several weeks, but was never updated prior to today. Of his select clippings, the president’s taste ranged from a number of topics: including pets, food, and of course, politics. Eight boards have been created with the following tabs: Obama-inspired recipes, Pet Lovers for Obama, Just the facts, Obama 2012 in action, Faces of change, The First Family, ObamArt, Obama 2012 Merch.

Feel free to follow the Obama’s Pinterst account by clicking here. Vote that man into office again this November.