Apple Watch to Control Your Car With Tesla App 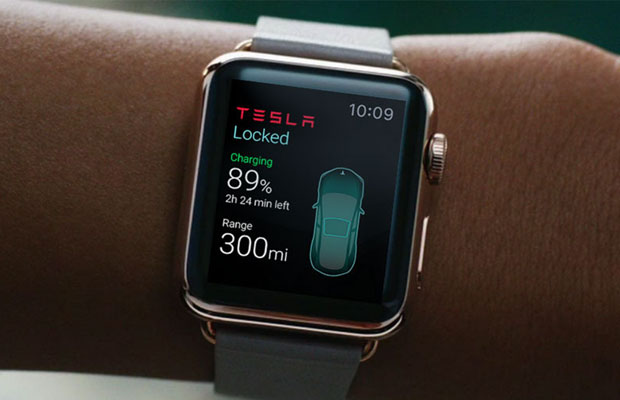 One fantasy most smartwatch owners’ dream of is starting up their car directly from their wrist. One aspiring developer looks to be at the edge of such an innovation with his upcoming Apple Watch app—creating a prototype program that shows how you might be able to remote-control Tesla on the upcoming werable.

Created by Ukraine developer Eleks, the app demonstrates how users could control some of the basic controls of the Tesla S model from the Apple Watch. “[F]or simplification of prototyping we used an unofficial mocked-up Tesla back-end API, which is a reverse-engineered JSON API of the real Tesla API,” Eleks’ Markiyan Matsekh shared with Mashable. He continued by saying the following:

“We skipped the authentication module and just used the API. So to run the app on a real Tesla we only need to add authentication and redirect it to the real backend.”

Apple’s WatchKit lets developers create third-party apps, though Apple admits to it bearing serious limitations such as no access to the device’s accelerometer and gyroscope, Taptic Engine, and built-in speaker or microphone. The team voiced its concerns via project page of the app:

“We can now confidently say that creating anything really necessary and fully functional for Apple Watch with the current SDK version is very, very difficult, and many of the things promised at launch that were perfect for some business ideas are not at all available yet.”

Despite such restrictions, the WatchKit still offers access to rudimentary functions such as the ability to lock and unlock the car, turn on headlights, and monitor battery life. At least that’s something most Tesla car owners should be excited for.