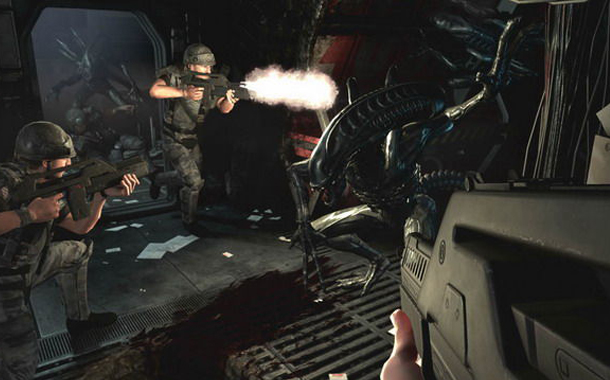 Randy Pitchford, the big wig over at Gearbox has promised that Aliens: Colonial Marines will answer all the burning questions viewers have had concerning the previous Alien movies. Randers stated in OPM that “You’ll explore the cargo bay and you’ll see the milky trail from Bishop’s ripped-in-half body, and his legs,” Sounds great! He went on to say “The dropship that Bishop piloted — that Ripley, Hicks and Newt all escaped on, you’ll ride that.” Here’s more from his interview:

“What’s interesting is it’s fiction, and sometimes the fiction actually has some mutually exclusive ‘facts.’ We’ve identified some of those and taken them to [20th Century Fox] and been like ‘can we come up with something that makes sense? … what happened to Burke? What happened to Hudson? They’re there, somewhere. They’re all fun play spaces that you get to visit after these events unfolded.”

The first-person shooter was in development limbo for years and is currently slated to hit retail shelves come Sprint 2012. Hopefully it fares better than the next-gen Aliens Vs. Predator.